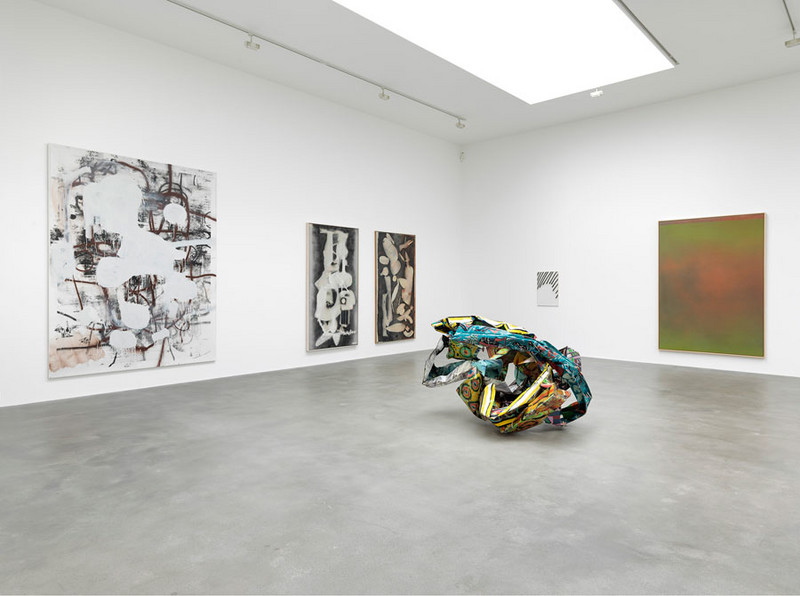 Gagosian is pleased to present “Sprayed”, organised by Jona Lueddeckens and Greg Bergner.

This extensive exhibition spanning four generations explores the myriad ways in which artists have employed the impulsive yet de-personalized and non-gestural forces of spray. It begins with Paul Klee's work on paper Seltsames Theater (1929), where he improvised with a blowpipe to achieve hazy background effects in a circus scene. This tentative experiment presaged the bold and diverse artistic licence that would come with the post-war advent of aerosol paint as a consumer product and the use of the industrial paint compressor.

From the mid-1950s, sculptor David Smith sprayed enamels over various studio objects and offcuts laid on canvas and paper as stencils; the resulting images recalled Paleolithic cave paintings made by blowing pigment over hands pressed flat. John Chamberlain blurred the lines between painting and sculpture by torquing scrap automobile parts into painterly abstractions, then enhancing the original paint surface with fresh sprays of coloured lacquer. Lawrence Weiner's interaction with the medium resulted in a simple, dispassionate instruction: Two Minutes of Spray Paint Directly Upon the Floor From a Standard Aerosol Spray Can (1968); while Martin Barré tested it at different distances and pressures in a series of rapid strikes producing sequences of stripes and cryptic punctuations on paper.

Artists who came to prominence in the 1990s, such as Albert Oehlen, Christopher Wool, and Rudolf Stingel continue both to employ and emulate spray in sophisticated painterly compositions that uphold a formal tension between direct and indirect mark-making, free-form and control. In recent years, further exploration of this zone between deliberation and contingency has resulted in Tauba Auerbach's subtle creased canvases, Sterling Ruby's huge landscapes in which undelineated forms merge with atmospheric neon layers, and Kim Gordon's Wreath Paintings, which use readymade decorative wreaths as stencils for vertiginous abstractions. Katharina Grosse—a standout in the current Venice Biennale with her entropic environment enlivened with “radioactive” colour—underscores the urgent temporality of the medium in intricately layered canvases where the action of painting overlaps and intersects at different frequencies.

The exhibition is accompanied by a fully illustrated catalogue with essays by John Corbett and Nicholas de Monchaux.
www.gagosian.com