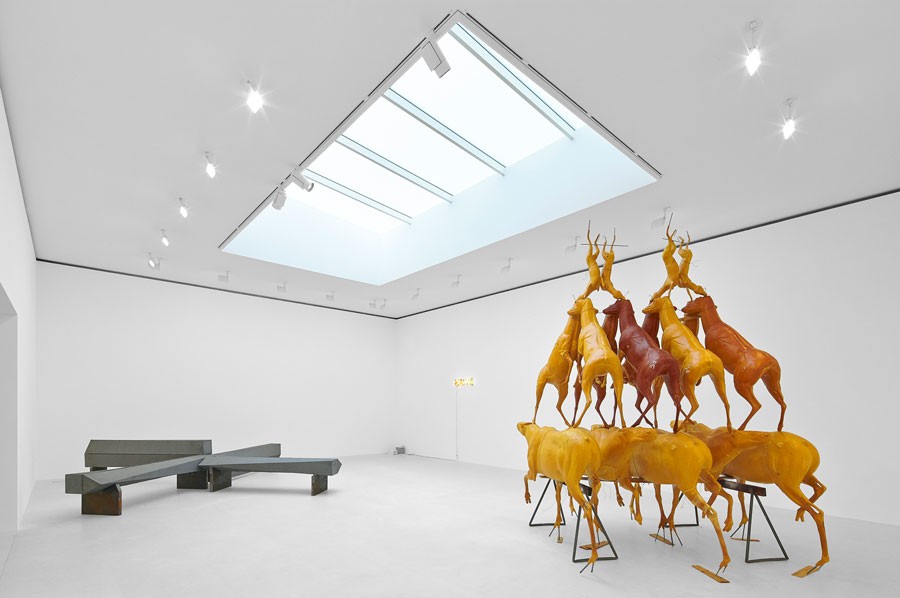 Since the 1960s, Nauman's radical interdisciplinary approach has challenged conventions while producing new methodologies for creating art and meaning. His rigorous, ascetic engagement with the existential dichotomies of life/death, love/hate, pleasure/pain has embraced performance, video, holography, installation, sculpture, and drawing. From the attitudes and forms of his Post-Minimalist and Conceptual work to his most recent sound installations, persistent themes and ideas appear: the use of the body as material; the relationship between image and language, art and viewer; and the generative interaction of positive and negative space.

William T. Wiley or Ray Johnson Trap (1967) is an early example of Nauman's resourceful and at times afflictive manipulation of the body. During a visit to his former professor William T. Wiley's home, a bundle of mail art by Ray Johnson arrived. Nauman arranged the odds and ends sent by Johnson—shoelaces, a scarf, a matchbook—around Wiley's body as he lay on the floor; when Wiley arose, he photographed the peculiar silhouette. What appears to be a snapshot of strewn accoutrements is in fact a fleeting "trap" in which he engages two of his conceptual forebears.

In Audio Video Piece for London, Ontario (1969–70), Nauman uses a closed-circuit television, a camera, and an audio recording to confuse sensory perception. The television broadcasts images of an adjoining room. Rhythmic noises emanate from the inaccessible space, prompting the question of why it appears completely empty on-screen. Conceived a decade later, the geometric steel sculpture Dead End Tunnel Folded into Four Arms with Common Walls (1980–87) similarly conveys disconnection and miscommunication. The “dead ends” represented by a floor-bound steel cross provide a primitive architectural maquette for a dysfunctional space, echoing Nauman's Corridor installations of the 1960s and 1970s, in which viewers encountered disorienting passages leading to nowhere.

Beginning in the mid-1960s, Nauman exploited the ubiquity of neon signage to produce “art that would kind of disappear, an art that was supposed to not quite look like art.” He created luminous wordplays that alluded to tensions both individual and social, but which challenged viewers to find their own resonance. In Malice (1980), the foreboding noun is illuminated in red neon tubes, obscured behind its inverted spelling in green. The jumbled letters may suggest malice that has gone unnoticed, or imperviousness to violent acts.

Animal Pyramid (1989) is a stack of seventeen taxidermy molds rising to twelve feet. The carnivalesque arrangement of these alien creatures made out of amber-hued polyurethane evokes the dichotomy of nature and sport: four upside-down foxes crown graduated rows of deer and caribou, eerily featureless—even ambiguous—without their prized pelts and horns. The entire ensemble is visibly cobbled together with wire, the work of a morbid puppeteer. Like the preceding work Carousel (1988)—where dismembered taxidermy forms hang and drag from a steel axis that turns in an agonizing danse macabre—the sculpture disturbs with its vision of carnage submitted to an artificial and bloodless geometric order.

In the deadpan Setting a Good Corner (Allegory and Metaphor) (1999), a single, later articulation of his most enduring subjects, Nauman films himself constructing a fence at his ranch in New Mexico. Recalling his performances of the 1960s such as Walking in an Exaggerated Manner Around the Perimeter of a Square (1967–68) and Bouncing in the Corner (1968–69), he uses a repetitive physical task—in this case, a necessary one for property maintenance—to determine the narrative and duration of a performative work. Dislodging art from the paradigm of the highly crafted object, Nauman predicates his ongoing conceptual inquiry on the spaces, words, politics and idiosyncrasies of unfiltered reality.