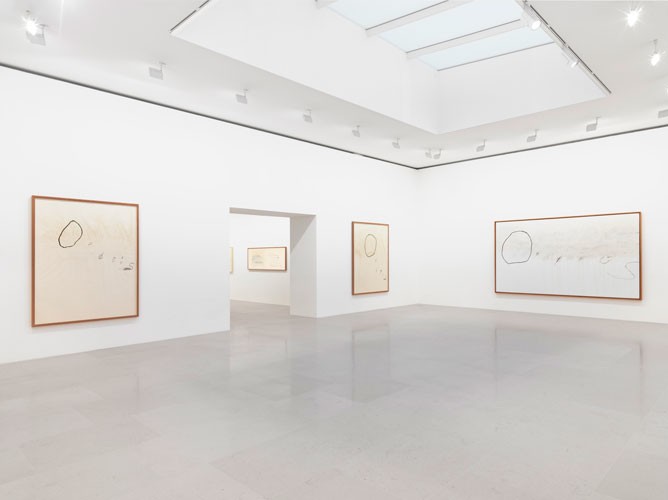 Oh you lost god! You unending trace!
Only because at last enmity rent and scattered you
are we now the hearers and a mouth of Nature.
—Rilke, Sonnets to Orpheus, from Twombly’s bilingual edition, trans. M. D. Herter Norton, 1942.

Gagosian is pleased to present an exhibition of paintings and works on paper by Cy Twombly. It coincides with the retrospective “Cy Twombly” opening at Centre Pompidou, Paris on November 30.

The selection of works, dating between 1968 and 1979, take as their subject the figure of Orpheus. Orpheus, the mythic archetype representing the artist and the creative process itself was also the subject of Sonnets to Orpheus, a cycle of fifty-five sonnets written by Rainer Maria Rilke in 1922, which were of great inspiration to Twombly. The works on show have never been brought together until now.

Orpheus’s lyrical skills were such that he was able to convince Hades, god of the underworld, to return his wife and muse, Eurydice. Hades’s one stipulation was that Orpheus not turn to look at Eurydice as he walked back toward the world of the living. But Orpheus could not resist and she was cast back forever. Later, he would be torn apart by Dionysian maenads.

The myth of Orpheus also inspired French composer Pierre Henry’s The Veil of Orpheus, a 1953 composition of musique concrète. In his recording, Henry tore cloth to mark the moment when Orpheus lost Eurydice for the second time. The sound of the tearing cloth, symbolizing the rent between life and death, is transformed by Twombly into a painting of epic scale bearing the same title.

Rilke wrote of artists as links between the past, present, and future. In urgent gestures, Twombly was able to evoke centuries of historical record and artistic endeavor. In The Veil of Orpheus (1968), he traced wax crayon lines over panels of painted canvas, creating what he referred to as “a time line without time.” In the painting Orpheus (1979), he inscribed the name of Orpheus in the Cyrillic alphabet in an allusion to his eventual dismemberment. In his rendering of the Western myth, Twombly traces “a two-way movement: infinity and forgetfulness; destruction and transcendence; ascent and descent.” (Mary Jacobus, Reading Cy Twombly: Poetry in Paint).

A fully illustrated catalogue will accompany the exhibition.

Cy Twombly (1928–2011) was born in Lexington, Virginia. He studied at the School of the Museum of Fine Arts, Boston (1947–49); the Art Students League, New York (1950–51); and Black Mountain College, North Carolina (1951–52). In the mid-1950s, following travels in Europe and Africa, he emerged as a prominent figure among a group of artists working in New York that included Robert Rauschenberg and Jasper Johns. Major retrospectives were held at the Whitney Museum (1979); Kunsthaus Zürich (1987, traveled to Madrid, London, Düsseldorf, and Paris); and Museum of Modern Art, New York (1994, traveled to Houston, Los Angeles, and Berlin). In 1995, the Cy Twombly Gallery opened at The Menil Collection, Houston, exhibiting works by Twombly since 1954. The European retrospective “Cy Twombly: Cycles and Seasons” opened at Tate Modern, London in 2008 and traveled to Bilbao and Rome. “Cy Twombly: The Natural World, Selected Works 2000–2007,” Art Institute of Chicago (2009) and “Sensations of the Moment,” MUMOK, Vienna (2009) were important surveys. In 2010, his permanent site-specific painting Ceiling was unveiled in the Salle des Bronzes at the Musée du Louvre. At the same time he was made a Chevalier of the Légion d’honneur by the French government. Twombly died in Italy in 2011.