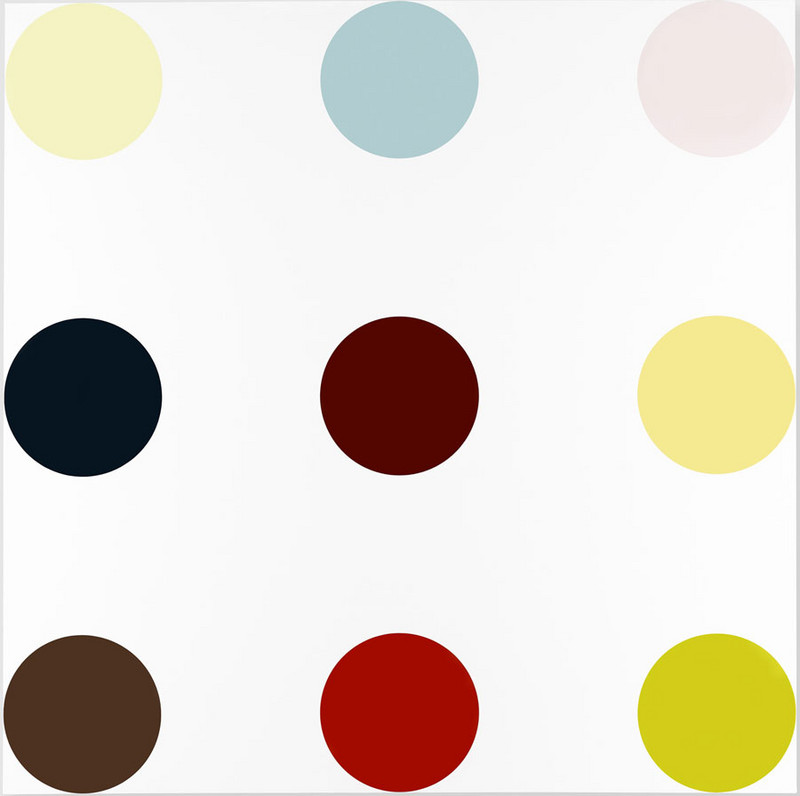 I was always a colorist, I’ve always had a phenomenal love of color... I mean, I just move color around on its own. So that’s where the spot paintings came from—to create that structure to do those colors, and do nothing. I suddenly got what I wanted. It was just a way of pinning down the joy of color.
—Damien Hirst

Gagosian Gallery is pleased to present “The Complete Spot Paintings 1986–2011” by Damien Hirst.

The exhibition will take place at once across all of Gagosian Gallery’s eleven locations in New York, London, Paris, Los Angeles, Rome, Athens, Geneva, and Hong Kong, opening worldwide on January 12, 2012. Most of the paintings are being lent by private individuals and public institutions, more than 150 different lenders from twenty countries. Conceived as a single exhibition in multiple locations, “The Complete Spot Paintings 1986–2011” makes use of this demographic fact to determine the content of each exhibition according to locality.

Included in the exhibition are more than 300 paintings, from the first spot on board that Hirst created in 1986; to the smallest spot painting comprising half a spot and measuring 1 x 1/2 inch (1996); to a monumental work comprising only four spots, each 60 inches in diameter; and up to the most recent spot painting completed in 2011 containing 25,781 spots that are each 1 millimeter in diameter, with no single color ever repeated.

In conjunction with the exhibition will be the publication of The Complete Spot Paintings 1986–2011, a fully illustrated, comprehensive and definitive catalogue of all spot paintings made by Hirst from 1986 to the present. Published by Gagosian Gallery and Other Criteria, The Complete Spot Paintings 1986–2011 includes essays by Museum of Modern Art curator Ann Temkin, cultural critic Michael Bracewell, and art historian Robert Pincus-Witten as well as a conversation between Damien Hirst, Ed Ruscha and John Baldessari.

The third issue of the Gagosian App for iPad will also launch January, providing an interactive, in-depth look at the series that features more than ninety spot paintings.

Damien Hirst was born in 1965 in Bristol, England. Solo exhibitions include "The Agony and the Ecstasy," Museo Archeologico Nazionale di Napoli, Naples (2004); "A Selection of Works by Damien Hirst from Various Collections," Museum of Fine Arts, Boston (2005); Astrup Fearnley Museet for Moderne Kunst, Oslo (2005); "For the Love of God," Rijksmuseum, Amsterdam (2008); "No Love Lost," The Wallace Collection, London (2009); "Requiem," Pinchuk Art Center, Kiev (2009); and “Cornucopia,” the Oceanographic Museum of Monaco (2010). He received the Turner Prize in 1995. His work is included in many important public and private collections throughout the world.