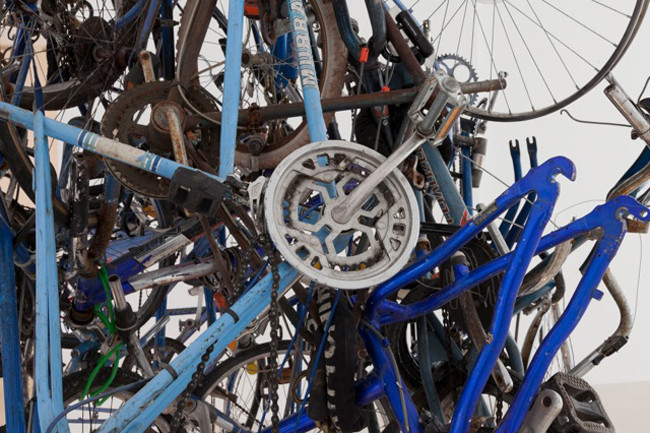 Gagosian Gallery is pleased to announce Dan Colen's first solo exhibition in Paris. “Out of the Blue, Into the Black” is a eulogy in three parts comprising paintings, installation, and a sculpture.

The title conflates two songs that open and close Neil Young’s 1979 album Rust Never Sleeps: “Hey Hey, My My (Into the Black)” and “My My, Hey Hey (Out of the Blue)", with its famous line “It’s better to burn out than to fade away,” which Young wrote in reference to his personal fears of becoming obsolete and, correspondingly, to the then-recent deaths of Elvis Presley and Sid Vicious, and which was invoked many years later by Kurt Cobain in his suicide note. Similarly, Colen has used the lyrics here to evoke a fear of the erosion of influence, to point to the ways in which death inflects celebration, and to remind us of what we try to hold on to, even as it eludes our grasp.

Colen began making “confetti” paintings in the wake of his friend Dash Snow’s death in 2009. Like the ancient pagan custom of throwing confetti at celebratory events, the paintings are exercises in the precious yet momentary qualities of joy and magic. The confetti paintings exist both as actual Mylar confetti adhered to canvas, and, in this instance, as trompe l’oeil oil paintings. To date, Colen has used trompe l’oeil not only to simulate, but also to elucidate the absurdity and inadequacy of illusion. The memorial quality of this series is underscored by its title, “Moments Like This Never Last," which Colen took from Snow, who borrowed it from the Misfits for his second solo exhibition in New York in 2005.

The installation in the gallery recalls the NEST projects that Colen made with Snow by shredding phone books and tearing open feather pillows to create orgiastic environments. But here the playful, boisterous concept takes a dark and morbid turn. The space, tarred and feathered from top to bottom, becomes a stand-in for the body on which pain and humiliation is inflicted by the vernacular mob tradition. Thus the exuberant life and gleeful tumult of the nests is stilled forever, and the viewer is left enveloped in a space where the once whirling feathers and leaves of paper are stuck fast to viscous, tar-blackened surfaces, like a bird trapped in a lethal oil slick.

In the sculpture, My Old Friend the Blues, Colen creates a tumbledown-crackup shrine, ambiguous and self-consciously clumsy in its purpose. The “enshrined” object is a sagging cluster of beat-up, blue bicycle parts scavenged from the streets of New York City. These chained-up, forgotten bicycles have become so fused to the urban streetscape as to go unnoticed—that is, until they are cut free and brought back as art, their color denoting the inevitable return of melancholy. Thus, by embracing the latent power of materials and their ambivalent effects, Colen enacts for his own time an inherited belief, tempered with skepticism, in the redemptive and transformative processes by which art can be wrought from the disenfranchised and overlooked.

Dan Colen was born in New Jersey in 1979. He graduated with a BFA in Painting from the Rhode Island School of Design in 2001. Exhibitions include the 2006 Whitney Biennial, New York; "USA Today," The Royal Academy, London (2006); "Defamation of Character," PS1 Contemporary Art Center, Long Island, New York (2006); "Fantastic Politics," The National Museum of Art, Architecture and Design, Oslo (2006); "Skin Fruit: Selections from the Dakis Joannou Collection," The New Museum, New York (2010); "Peanuts," Astrup Fearnley (2011); and "In Living Color," the FLAG Art Foundation, New York (on view until May 19, 2012).
www.gagosian.com