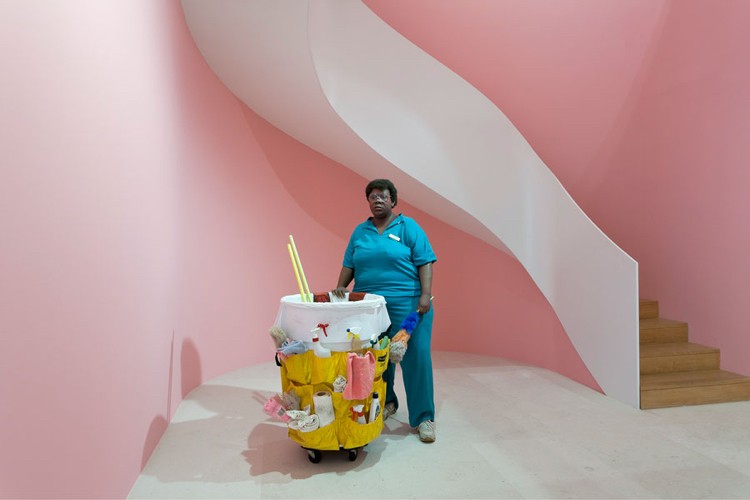 I do not love fiction, I love history.
—Duane Hanson

A painting is simply a material object but, because of the situation, the discourse, the history—it’s also inevitably something else.
—Olivier Mosset

Gagosian is pleased to present an exhibition of works by Duane Hanson and Olivier Mosset.

The hyperrealistic sculptures of Duane Hanson and the minimalist paintings of Olivier Mosset are brought together in this exhibition for the first time. The two artists, radically different and equally extreme in their respective lines of inquiry, seek, each in his own way, to test the boundaries of human perception.

For Duane Hanson, highly detailed and precisely realized figuration became tools through which to resist objectivity and neutrality. Hanson’s startlingly lifelike human figures that portray people, with an emphasis on the American working class, distinguished his oeuvre over forty years. At the beginning of his career, Hanson created tableaux of traumatic and violent social upheaval, such as Abortion (1966) and Race Riot (1969–71), many of which he destroyed later, wishing to be remembered for the more subtly evocative works of his mature period; works exhibited that typify this include Window Washer (1984) and Housepainter I (1984–88). Hanson’s individual figures of ordinary Americans, evolving out of precedents including nineteenth-century French Realism, evoke cathartic narrative and pathos. His precision with small details such as hair strands, the elasticity of skin, the textures of clothing, and the expressiveness of a face lost in thought, arouse strong emotions ranging from empathy to revulsion.

In pursuit of formal rigor and the physical roots of painting, Olivier Mosset’s art is direct and self-evident, suppressing figuration, subjectivity, symbol, and metaphor in a practice that at once contains and rejects the dialectical history of painting. A member of the minimalist collective BMPT that also included Daniel Buren, Michel Parmentier, and Niele Toroni, Mosset’s exploration is dedicated to interrogating fixed ideas about creative authorship. BMPT was in step with an intellectual wave of twentieth-century critical theory concerned with deconstructing ideas about the creation and interpretation of culture, Roland Barthes’s “Death of the Author” being a key example.

The 200 or more identical oil paintings that Mosset produced between 1966 and 1974, of a small black circle at the center of a square white canvas, are seen as the acme of BMPT’s experimental approaches to painting, which also sought challenge the social function of the artist. Associated with conceptual abstraction, Mosset’s works represent pure color and shape, inciting open-ended physical experiences of surface, scale, and pattern. In five new monochromatic canvases, each in a muted or heightened pitch of color, Mosset continues his exploration into the possibilities of pure form.

In a potent juxtaposition that contrasts the aspiration toward sublime neutrality with the desire to represent the pathos of human reality, two poles of twentieth-century art create arresting physical experiences, in which the viewer can consider his or her own ways of seeing.