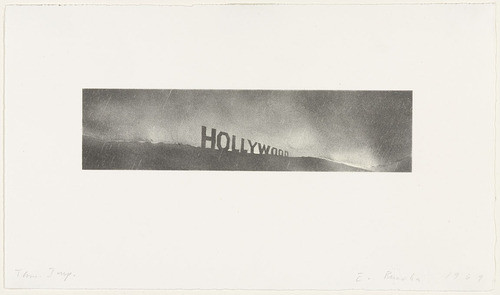 “Prints and Photographs” surveys Ruscha’s prints of the past forty years, together with rarely seen photographs produced since 1959, providing an in-depth examination of the unrestricted gestures that fuel his assiduous art. Ranging freely and dexterously across traditional, unconventional, or sometimes even comestible materials, Ruscha’s prints are a fluid forum for the spirited investigation of what a limited-edition artwork can be. His absorption and re-thinking of the requirements of each graphic procedure and format result in step-by-step transformations, a process that echoes the eternal return of the subjects that make up his broader oeuvre.

Ruscha arrived in Los Angeles in 1956 to study commercial art at the Chouinard Art Institute (now CalArts), and underwent a six-month apprenticeship with a printer beginning in 1958. Attracted to the reproducibility, collaborative processes, and happy accidents specific to printmaking, he began to create lithographic editions, infusing the Pop and Conceptual sensibilities of the time with vernacular wit and existential melancholy. His exquisitely refined prints engage a breadth of formal themes, from text and typography to still life and quotidian architecture, played out in a spirit of rigorous yet restless experimentation.

Ruscha’s early photographs also provided foundations for his broader artistic practice. Isolating overlooked everyday subjects, he used the camera to “flatten” the images he intended to draw and paint, from apartment buildings to commodities and comestibles such as raisins and bottles of turpentine. Exercises in the ambiguity of scale, such as Untitled (Newspaper Sculpture) (1959–60, printed in 2005) and Dodger’s Stadium (1967, printed in 2013) reveal a common abstraction in small objects and large-scale architecture; while Joyce Wallace’s Automatic Table Arrangement (1962, printed in 2005) shows Ruscha’s compositional mind at work. Roof Top Views (1961) pictures local suburban streets from a high vantage point, while Roof Top Views 50 Years Later (2003) returns to the same locations to reveal neighborhoods only subtly changed by the sluggish pace of time, economy, and demographics.

“Books & Co.” presents Ruscha’s legendary artist books together with those of more than 70 contemporary artists from all over the world—from Russia to Japan to the Netherlands—who have responded directly and diversely to his inspiration. Some of the books are installed so that viewers can browse their pages.

Inspired by the unassuming books that he found in street stalls during a trip to Europe, in 1962 Ruscha published his first artist book, Twentysix Gasoline Stations under his own imprint, National Excelsior Press. A slim, cheaply produced volume, then priced at $3.50, Twentysix Gasoline Stations is exactly what its title suggests: twenty-six photographs of gas stations with captions indicating their brand and location, just like works of art. Initially, the book met with poor reception, and was even rejected by the Library of Congress for its “unorthodox form and supposed lack of information.” However, over time it acquired cult status, and by the 1980s it was hailed as one of the first truly modern artist books. Ruscha followed this up with a succession of similarly self-evident and deadpan books, including Some Los Angeles Apartments (1965), Nine Swimming Pools and a Broken Glass (1968), and Real Estate Opportunities (1970), all of which combined the literalness of early California pop art with a photographic aesthetic informed by minimalist sequence and seriality, shot through with a wry sense of humor.

Ruscha’s artist books have been deeply influential on peers and followers—from Bruce Nauman’s Burning Small Fires (1968), where Nauman burned a copy of Ruscha's Various Small Fires and Milk (1964) and photographed the process; to Julie Cook’s Some Las Vegas Strip Clubs (2008), which turns the lights on nocturnal haunts; to Mishka Henner’s detailed Fifty-one US Military Outposts (2010), comprising aerial views of international U.S. military bases. Between these early and recent examples are a wealth of responses to Ruscha's ideas by artists from different generations and cultural contexts, gathered here in one celebratory exhibition.

An international conference on Ruscha’s work will take place in two sessions; the first at the Centre Georges Pompidou, Paris on March 11 and 12, followed by the Centre de Création Contemporaine, Tours on March 13. For full details of participants please consult www.centrepompidou.fr and www.ccc-art.com.

Published by MIT Press in 2013, Various Small Books: Referencing Small Books by Ed Ruscha documents ninety-one of the books inspired by Ruscha’s own, reproducing covers and sample layouts from each, along with a detailed description. Various Small Books... also includes selections from Ruscha’s books and an appendix listing most of the known Ruscha book tributes.