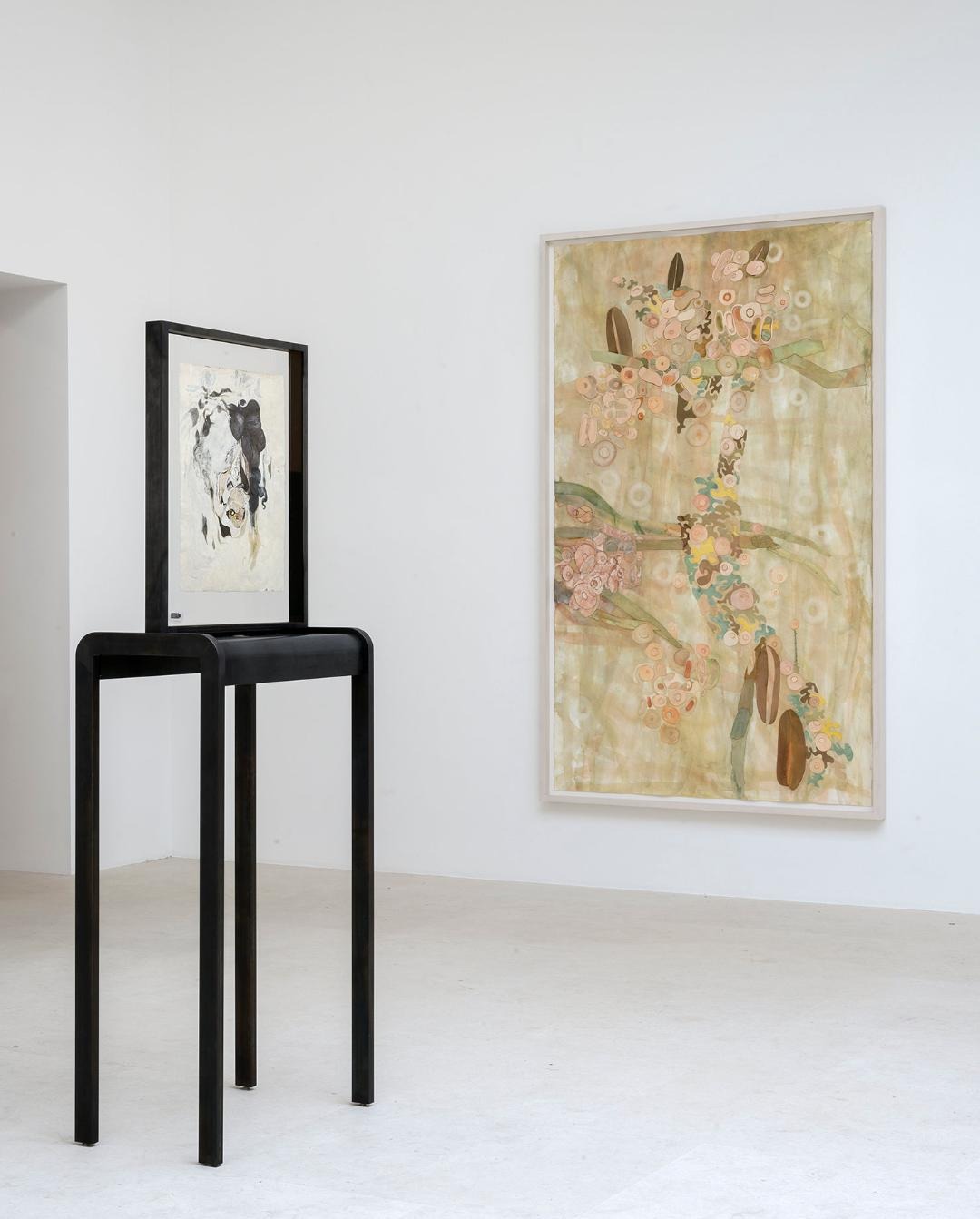 The symbolic for me is about carrying and the potential to carry—it’s like magic. So a character like a jellyfish can be made up of several different bodies, can exist at different times—can be a character that’s symbolic.
—Ellen Gallagher

Through processes of accretion, erasure, and extraction, Gallagher has invented a densely saturated visual language in which overlapping patterns, motifs, and materials pulse with life. By fusing narrative modes including poetry, film, music, and collage, she recalibrates the tensions between reality and fantasy—unsettling designations of race and nation, art and artifact, and allowing the familiar and the arcane to converge.

In the intricately tessellated Ecstatic Draught of Fishes (2019), Gallagher subverts an art historical lineage that begins with The Miraculous Draught of Fishes (1618–19)—Peter Paul Rubens’s depiction of one of Christ’s miracles—which later served as compositional inspiration for Théodore Géricault’s Raft of the Medusa (1819), showing the gruesome aftermath of a shipwreck off the coast of present-day Mauritania. Géricault’s painting was one of the sources for Slave Ship (1840), the horizonless scene in which J. M. W. Turner confronts the barbaric practice of throwing slaves overboard to lessen a vessel’s weight during a storm. These three paintings seem to have been overlaid and atomized in Gallagher’s intense and delicate work, addressing the relationship between the mercurial sea and intertwined histories of colonialism, slavery, and belief. Myriad spots resembling eyes form a shimmering, amoebic cloud on a background of penmanship paper, while a caryatid headrest from the Congo—another African country brutally colonized by Europeans—acts as a sort of visual anchor.

In the Watery Ecstatic series (2001–), Gallagher invents complex biomorphic forms that she relates to the mythical Drexciya, an undersea kingdom populated by the women and children who were the tragic casualties of the transatlantic slave trade. Cutting into thick paper in her own version of scrimshaw—the practice of carving whale bones—Gallagher invests the afterlives of the Middle Passage with a sense of material control, her intense focus giving rise to new peripheries. The exhibition includes three new works from this series: one is a response to Dutch artist Albert Eckhout’s (1610­–1665) so-called “commodity portraits” of recently unfree Africans, indigenous Brazilian people, and plants; another references the popular elephantine sculptures fashioned out of ivory plundered by Belgian colonists in the Congo; and a third is all white, with masklike faces, barnacles, and hybrid creatures assembled along what appears to be a jagged coastline. In two double-sided drawings from the Morphia series (2008–12), displayed in custom glass and metal cabinets, representations of transformed artifacts merge with marine imagery to create transparent palimpsests resembling stromata or organic matter. As they mutate and congeal, microbial patterns seem to infer a certain euphoria, a narcotic state suggested by the series title.

Negroes Battling in a Cave (2016)—four textured black paintings containing all but obscured collaged elements from midcentury American race magazines like Ebony and Sepia—refers to the topical discovery of a racist joke in Kazimir Malevich’s Black Square (1915). In 2015, beneath the top layer of paint, conservators discovered an inscription that Malevich likely encountered in an earlier painting by the French writer Alphonse Allais, A Battle of Negroes in a Cave on a Dark Night (1887). By alluding to this hidden history linked to the tabula rasa of modern art, Gallagher suggests that the psychosis of race relations underscores even the history of abstraction.
www.gagosian.com