A Group Exhibition Of Text-Based Works 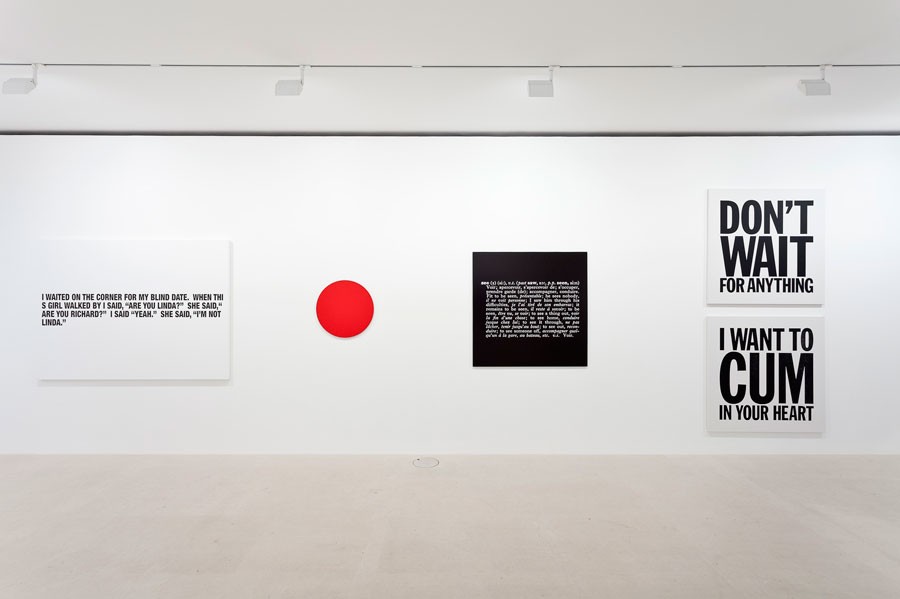 Words have these abstract shapes, they live in a world of no size.
—Ed Ruscha

Gagosian Gallery is pleased to present "LEXICON," an exhibition of artworks that employ the written word.

A lexicon is a stock or inventory of systematized language, whether personal or belonging to a larger cultural context, which can be shared and deployed. Since the beginning of recorded history, language and art have collided and intersected. And from the modern era onwards, artists have employed words and language to diverse effect, using writing as both act and subject—in print, light, sculpture, and paint on canvas. Works in the exhibition include Marcel Broodthaers's Académie I (1968); Alighiero Boetti's embroidered magic word squares (Arazzi) (1977–92); Ed Ruscha's large-scale three-part painting A, B, C (1985–87); Jenny Holzer's stone agit, Selections from the Living Series (Bench #9) (1989); Douglas Gordon's text work for a television monitor, A Moment's silence (for someone close to you) (1998); Jean-Michel Basquiat's cultural cryptograms; and Cy Twombly's abstruse and airy scratchings. Lawrence Weiner has created a new site-responsive version of AT THE SAME MOMENT (2000) for the rue de Ponthieu gallery, and Piero Golia has designed a printed wallpaper especially for the exhibition.

Language and art have never lived too far away from one another: concrete poetry, propaganda, graffiti, and Pop art, among other genres, testify to their dynamic interplay over time. "LEXICON" presents a gathering of examples from artists who have made language and letters into what poet William Carlos Williams would have referred to as "the thing itself": language becoming physical object.