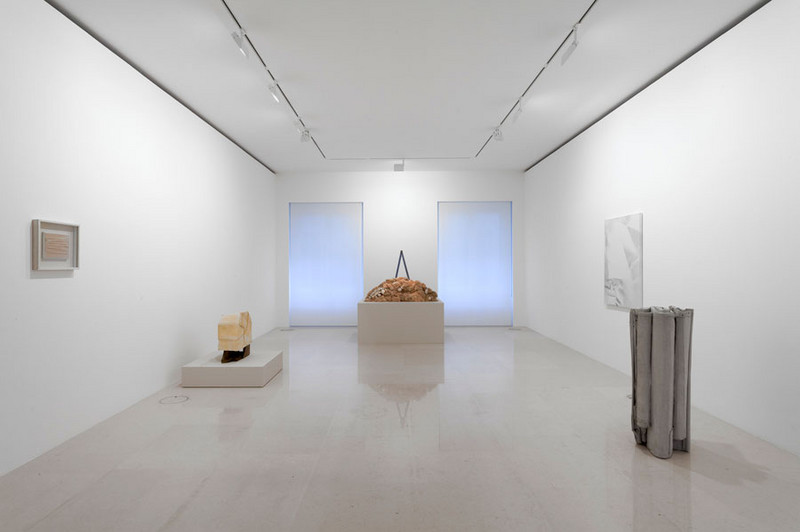 When I am folding, I am objective and that allows me to lose myself.
—Simon Hantaï

Gagosian Paris is pleased to present “PLIAGE / FOLD.” The exhibition will include works by:

“PLIAGE / FOLD” brings together artists from different generations who have explored the act of folding as both concept and formal process. Folding as action, illusion, and symbol has appeared throughout contemporary art and literature, from Simon Hantaï’s literal process of folding the canvas, dousing it in oil paint, then unfolding it to reveal inadvertent yet lyrical patterns; to Gilles Deleuze’s influential meditation The Fold: Leibniz and the Baroque (1988), in which the world is interpreted as an infinity of surfaces twisting through time and space; to Tatiana Trouvé’s recent Refoldings sculptures cast from discarded and refolded packing materials.

For Robert Rauschenberg the act of folding produced Freeway Glut (1986), a muscular assemblage of manipulated industrial parts; while John Chamberlain worked lightly and in miniature with resin-coated crumpled paper. Some works involve aleatory processes that transcend artistic control, such as Hantaï’s Blanc (1974), or Davide Balula’s canvases that he immersed in soil or in rivers, allowing incidental organic residue to take hold.

Finally, there is the role of the sacrificial form in the genesis of the fold: in Untitled (2010), Rudolf Stingel spray-painted canvas through a layer of wrinkled and creased gauze, then removed it to reveal the resulting imprint; correspondingly Folded, the title of Rachel Whiteread’s cast plaster sculpture of 2004, alludes to the making of the sacrificial form rather than the final cast object. By inverting the relationship between container and contained, she renders the nuances of empty space as solid matter. In this exhibition, folding is shown to be an arterial process through which diverse works literally or symbolically turn in on themselves.
www.gagosian.com