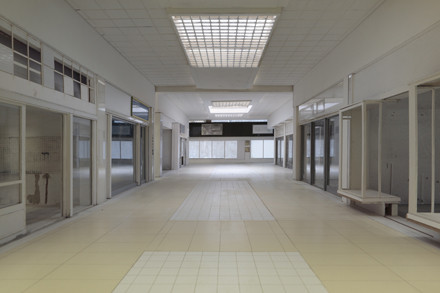 Christian Haake, White Elephant, 2011. Filmstill, Photo: Tobias Hübel
How do we construct reality? What role do individual and collective memories play in its formation? To what extent can reality and memory be rendered in imagery? These questions are central to Christian Haake's artistic practice.

Christian Haake (born 1969 in Bremerhaven) constructs memory. Transforming his memorized, mental images into precisely detailed objects and installations, Haake taps into our collective memory, forging a new image of reality. His concern lies not with the congruence, but with the divergence, causing a subtle fracture, which separates reality, perceptions, and mental imagery. The rich poetic potential of his works is directed not towards the affirmation of memory, but towards its subtle destabilization. Haake's work foregrounds the power of memory to generate reality, suggesting that memory – in its entire inexactitude – might communicate a "more truthful" image of reality than reality can itself produce. Working without recourse to such aids as photographs or dimensioning sketches, Haake’s art-making is open to and indeed flirts with the effects of divergence and slippage, resulting in new yet intrinsically coherent images.

While these constructions build on and grapple with memory, Christian Haake's works are distanced from reality by their minute size and are clearly not intended as direct reflections. The painstaking precision of Less Mess (2007) – a messy living room en miniature – extends even to the typography of its minute magazines and milk cartons. But at just 64 x 125 cm, this is a sketch of a reality, a set long abandoned by its actors, and a snapshot of a moment in time. Now Show (2009), on the other hand, is only minimally smaller than its subject. But the minute difference, which distinguishes this empty cinema billboard from its real-life counterpart, triggers a moment of irritation, inviting viewers to fill this void with their imaginations. At a formal level, Haake's affinity for models as a medium of compression places him, on a formal level, in the company of such artists as Oliver Boberg and Thomas Demand.

For the exhibition White Elephant at the GAK Gesellschaft für Aktuelle Kunst, Christian Haake will fit a model of an abandoned 1960s-era shop entrance into the rectangular exhibition space. By this means the model will enter a dialogue with the institution's architectural space, transforming it into a coulisse as an extension of the work. The gallery will become the site of a plethora of potentialities, which shimmer below the surface of Haake's nominally abandoned store. Visitors to the gallery will able to enter the near life-size store through the front entrance. The model's detailed components – its colour scheme, door handles, wiring spilling from the brick walls, fractured glass and drifting dust bunnies – conspire to form an almost picture perfect simulation which compresses reality into its stark confines while circling a void. And yet, as a model this work is a sketch of reality, revealing, in the words of Michel de Certeau, the "otherness of everyday life". At the same time, however, Haake's work stands for the romantic yearning to grasp this very otherness with its projection of "somewhere else".

The abandoned store at the core of Haake’s exhibition is complemented by a collection of works, which explore similar themes, ranging from films to collages and objects. Similarly, the exhibition's title – White Elephant –refers to an item of value which the owner cannot dispose of, has no use for, and which costs more to maintain than its actual value. In South-East Asia white elephants still are a symbol of power and wealth whose high maintenance costs could make a beggar of even the wealthiest, while in Western Europe the term is now commonly used to refer to the abandoned ruins of failed investment projects – shopping malls according to American stereotypes.