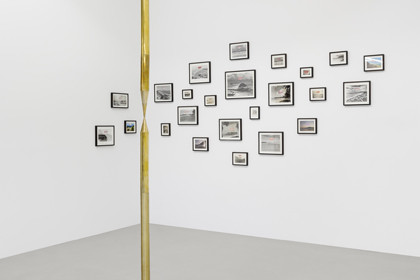 Nobody would seriously maintain that feminism’s urgent issues have been solved through lived social equality. It could, however, be the case that the focal points of feminism have shifted. What the Feminist Movement in the 1970’s and later the Punks in the 1980’s fought for has at least in part become a social reality, and that has lead to other issues taking centre stage. Accordingly, contact and interaction with early feminists and their doctrines has shifted significantly––for the generations born after 1970, the necessity of constantly standing up for feminist viewpoints has given way to a natural consciousness and to an omnipresent “live with it” feeling. The art theorist Monika Szewczyk speaks of a “profound absorption of those lessons of feminism that allows us to proceed without naming what we do––a pause in the forging of weapons in order to use them.” [1]

That in no way means that the social need for a feministic attitude no longer exists today. However, it can be stated that the tone of its expressions has changed. That they have perhaps–should one dare to say– become lighter, without having lost precision. That a tone has been established that is sufficiently sovereign to allow for occasional doubts in feminist doctrines without immediately smelling the scent of treason against its fundamental idea. Moreover we have reached a point where emancipation is no longer an issue for women alone; men are increasingly engaging with issues relating to it.

The group exhibition Girls Can Tell [2] displays works by a generation of artists born after 1970 that exemplify the shifted interaction with feminist issues in contemporary art. There are often feminist undertones, and at time feminist issues are expressed subliminally through the use of materials and techniques and employ a certain elegance of form and light aesthetic in order “to use these weapons.”

The group exhibition Girls Can Tell displays works by a generation of artists born after 1970 that exemplify the shifted interaction with feminist issues in contemporary art. There are often feminist undertones, and at time feminist issues are expressed subliminally through the use of materials and techniques and employ a certain elegance of form and light aesthetic in order “to use these weapons.” Approaching this field from diverse perspectives, the works presented in Girls can tell traverse a terrain of media which encompasses painting, photography, drawing, installation, ready-made work, film and sculpture.

Juliette Blightman, for example, has cut a grotesque face into the fabric of a petite pink dress with a floral edging, exposing a background that highlights both issues of female adolescence and violence against women. The works of Dirk Bell, Anna Ostoya, Marlo Pascual and Dirk Stewen, meanwhile, focus largely on pictorial issues, while offering subtle perspectives on the question of the place of women in society and art history. Shannon Bool’s work oscillates between the contexts of art history and everyday culture, revealing shifts in the social images of women while questioning the validity of motives of desire. Kajsa Dahlberg interviews a feminist activist and translates this negation of classic attributions at a formal level in her elusive images. Nina Hoffmann and Jeremy Shaw question the validity of conventional gender attributions. Maria Loboda presents a seductively attractive bomb, linking her work through its title with images of modern, confident and educated women. Verena Issel’s metaphoric images trace the history of female travellers and the challenges faced by women seeking to pursue careers. In an effort to create a visual expression for systems of social repression, Seb Patane represses the thoughts and emotions of Victorian women in a web of black lines. Susanne M. Winterling stages a psychological duel between two different images of women which remains undecided.

Girls can tell will be accompanied by an extensive serie of lectures that will reflect the assumption of the exhibition by different perspectives from art history, theorie, or writing (the serie is developed by Yvonne Bialek).

[2] The title of this exhibition refers to an album by American rock band Spoon from 2001.
www.gak-bremen.de