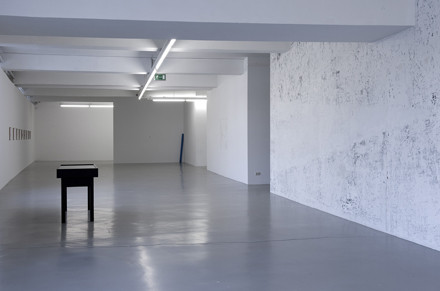 Julien Bismuth
The Ventriloquism Aftereffect, 2011
Exhibition view
Foto: Peter Podkowik
French artist Julien Bismuth (*1973, lives in New York and Paris) works at the interface of visual art and literature. Most of his oeuvre builds on texts found or penned by the artist. Bismuth's approach combines the words with objects, photographs and film material, integrating them within collages, installations, and developing text-based performances and video works. His affinity for the literary arts is also evident in his doctoral dissertation in Comparative Literary Studies, which he is writing at Princeton University. Bismuth also founded publishing house Devonian Press together with Jean-Pascal Flavien in 2005.

The indispensable nature of language, its inherent limits and the manipulation of meaning through quotation, cut-up techniques and reformulation are the central themes of Bismuth's exhibition The Ventriloquism Aftereffect at the GAK Gesellschaft für Aktuelle Kunst and the Institut français in Bremen. The exhibition title The Ventriloquism Aftereffect already refers to the phenomenon of the spoken word, more precisely to the relationship between language and perception, as it describes a neural disorder caused by brain injury which renders individuals unable to localize the voice of their conversation partner. The exhibition references the work of Austrian author Karl Kraus – his struggle to find a literary voice capable of reflection in the face of the horrors of World War I and his formal use of text, which he cut up, rearranged, and complemented with his own words. Walter Benjamin described this collage-like method in an essay on Karl Kraus, and the works on show in Bremen reflect Bismuth's reception of Kraus' thinking and technique. The exhibition brings together sculptures, films, installations, collages, scripts and aural works in a wide-ranging exploration of this central theme:

Bismuth’s film In dieser großen Zeit, for example, features a ventriloquist quoting Karl Kraus on the silence of the author in an age of bloodshed: “In dieser großen Zeit, die ich noch gekannt habe, wie sie so klein war, (...) in dieser ernsten Zeit (...) mögen Sie von mir kein eigenes Wort erwarten. (...) Die jetzt nichts zu sagen haben, weil die Tat das Wort hat, sprechen weiter. Wer etwas zu sagen hat, trete vor und schweige!” (In this grand time that I still know from when it was very small, (...) you may not expect any word of my own. (...) Those who have nothing to say, because the deed is speaking now, continue to talk. Let him who has something to say step forward and be silent!) The film's protagonist recites the text without visibly moving his lips in an opaque performance that shifts between verbal expression and silence (an abridged version of the text will be performed at the opening).A series of collages titled Schnitte adopts a more formal approach to Karl Kraus. Taking his cue from Kraus’ technique, Bismuth has cut text and images from newspapers, gluing, folding and enlarging on this material to unearth new meanings.

The audio work Catalog, version 1:1 (serving friction) also subscribes to this technique. The piece consists of an automated five-hour reading of work descriptions taken from art magazines published in 2010 from which, in true Krausian style, the names of the artists and the titles of their works have been stripped. The increasingly abstract descriptions of works by various artists, coupled with the disembodied computer-generated voice, expose the impossibility of reproducing visual detail in language.

The installation titled Storm Cloud of the 19th Century is a collage-like assemblage of various objects. Their deeper meaning is revealed in a painstakingly erudite text on the nature of clouds by John Ruskin which accompanies the work. Ruskin's “storm cloud” is the polluted aether of England's industrial revolution, which cast a shadow across the country throughout this period. The objects which Bismuth has assembled are metaphorical readings of the phenomena described by Ruskin in his writing: A broken vase refers to a particular passage in the text, while a solitary chair appears to have been carried to the exhibition by a flood surge; meanwhile a video depicts birds and clouds in bad weather, while in one photograph an indefinable cloud threatens to swallow up a crowd. Like actors, each of the objects performs a role assigned by the text. Bismuth will continue to contribute to this work throughout the exhibition, adding text components that will serve as footnotes to the installation and open the objects to new perspectives and interpretations.

Bismuth’s three-part Abîmes is comprised of a selection of square forms scratched on the walls of the GAK: one is outlined on the plain white surface; another is etched into the surface, while the third is outlined on a surface of wall that has been stripped to its base layer. The French noun ‚abîme’ means depth, while the verb ‚abîmer’ means to ruin or spoil. The work leaves it to the viewer to interpret the forms referencing their painterly depth, as signs of the passage of time or mere architectural damage. Viewers must fill the wall’s ‚gap’ with their imaginative thought, mimicking the reader’s contribution to a work of literature when disparate narrative threads and perspectives collide, requiring the reader’s active intervention to relate these elements to one another and literally make sense.

Similarly, the sculpture Shifter fills a void within the exhibition, and serves as a placeholder for the artist, disappearing from the exhibition when the artist is on site, and returning upon his departure. In linguistics and semiotics the term ‚shifter’ denotes a class of words whose meaning changes according to the situation and context of their usage (personal pronouns, for example, are an important group of shifters).

These works are complemented by a number of smaller interventions which, on a formal level, take their cue from punctuation signs: Ellipsis consists of a small stamp with three ellipsis periods, used to indicate that a text is incomplete. The stamp is complemented by three books, opened to their final pages and transformed into open-ended works by the addition of an ellipsis sign at the end of the final sentence. Blinking Idiot consists of nothing more than an LED sunk into the wall of the GAK. The LED blinks at intervals of ten seconds – just two seconds longer than the scientifically proven threshold of eight seconds, after which humans forget incidental phenomena. Ou (English: or) is comprised of a simple plastic pipe embedded into the wall. The pipe is a performative challenge to visitors, who can either look into it or place their ears to its end in the hope of hearing some aural revelation, whether produced by the artist or as a seashell concentrates the sound of its environment. Another work, titled Dud, features a small coin. Unstamped on one side, the coin lies on the floor of the GAK, as if it cast aside and awaiting the attentions of a passing visitor.

Like Ou and Dud, Bismuth’s Scripts series displays a performative edge, while also building a bridge between the GAK and the Institut français in Bremen. A blend of commentary, musing and instruction, English excerpts from these screenplay sketches are scattered throughout the exhibition at the GAK, while the French versions form the focus of the presentation at the Institut français.

The artist’s performances have recently been shown at the Kunsthalle Wien, the Tate Modern in London, and the Schirn Kunsthalle in Frankfurt/Main. The Ventriloquism Aftereffect is Julien Bismuth's first solo institutional exhibition in Germany. Following Shannon Bool's exhibition The Inverted Harem I (26 November 2010 through to 30 January 2011) The Ventriloquism Aftereffect is the second exhibition staged by the GAK in cooperation with CRAC Alsace Centre Rhénan d’art Contemporain Altkirch within the framework of the Franco-German exchange project THERMOSTAT
www.gak-bremen.de