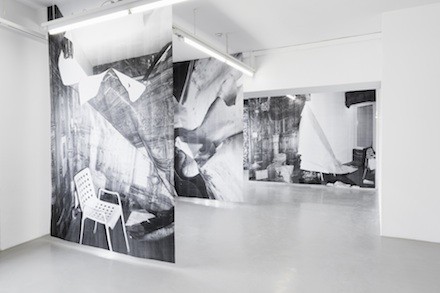 Peles Empire, Ever Built, exhibition view at GAK Bremen, 2014. Courtesy the artist. Photo: Tobias Hübel
Copies are closely connected to their originals yet create a distorted image of whatever they duplicate. Copies replicate and preserve their originals but also make it possible to view them in a new perspective. Even the process of reproduction itself is removed from the original, in a certain sense making the copy an abstraction of its original and causing a shift in perception, shapes, or materials.

Peles Empire – a collaboration between artists Katharina Stoever and Barbara Wolff – is a multifaceted exploration of these mechanisms. The starting point for their work is Peles Castle, a summer residence built for King Carol I at the end of the 19th Century in Romania’s Carpathian Mountains. The interior décor of Peles is characterized by a crude mash-up of décors, each room dedicated to a different historical era such as Gothic, Baroque, Renaissance and Art Deco. In its quintessence, the castle is a collection of copies in architecture, a dream of historical edifices and interiors made real. 2005 Peles Empire began by compiling a photographic documentation of its rooms. These images then served as the focal point of their artistic work in myriad ways, functioning as the basis for the works themselves as well as for curatorial projects.

As such, Stoever and Wolff reconstructed some of the castle’s rooms by wallpapering spaces with the photos taken in Peles. This environment often serves as a backdrop for the exhibition of works from other invited artists (e.g. in their former apartment in Frankfurt or in the project spaces they operate in London and Cluj) or for a bar (2011 for Frieze Projects at Frieze Art Fair, London). However, the reconstructed rooms can also function independently, as seen in 2009 in the group exhibition Space Revised. Friendly Takeovers in the GAK Bremen. Essential here is still the installation’s changing location between the private and public sphere: a salon in the artists’ home, a bar at an art fair, within a protected environment of an institution, or finally as an exhibition space in their London studio. Also key is the displacement of the original castle room’s three-dimensionality to the reproduction’s two dimensions and then back to the three dimensions of the exhibition space. Here the two-dimensional copy of the original is now the backdrop for the artists’ own installations or works from their colleagues. The result is a stepwise distortion at all levels. The serving of Romanian spirit in the Peles Bar during the Frieze Art Fair was an obvious add-on, as its consumption also distorts the perception of the world.

2012/2013, the castle copies made their way back to their country of origin: for about one year, Peles Empire ran a project space in Cluj, Romania. Part of the concept was to invite both artists in London and Cluj to participate in tandem. To illustrate the sameness and differences of both places, the same castle room served as the background for the two presentations – but in b/w in the United Kingdom whereas the Romanian space used the image in colour. The artists were given a free hand to deal with the photographic intervention already installed in the space as they pleased. “We stay entirely in the background. In this context, we offer something static that only changes through the traces of the last exhibitions and through the work of the artist. The artist’s influence on us is first and foremost the capacity to see the permanent installation in a different light." (Peles Empire)

Since 2010, the duo has varied their approach to working with the castle imagery and is pushing even further the concept of abstracting an original through its reproduction. The new work is still based on the interface between three and two-dimensional spaces, but also of objects and images as well as what is possible in the displacement of material. Here, the artists copy details in b/w from their large-format castle photographs onto DIN A3 paper (the standard copy size), thus creating reproductions of the reproductions whose colours, materiality and excerpt nature hardly contain a single reference to the original. These copies are then collaged on walls or processed into paper-mâché and transformed into large sculptures in minimalist shapes. The latter become hybrids of autonomous settings and supports for other works in playing a role in the overall architectural context of the space, functioning as dividers, screens or pedestals for the ceramics and smaller objects from Peles Empire. These sculptural works are further distortions of the DIN A3 images or the original interior furnishings of the castle. By the method of copying and the non-hierarchical juxtaposition of different materials and styles, Peles Empire distort the original ever more – that far that it almost disappears and something distinctive different takes shape.

For EVER BUILD, new works will be on display in a presentation specially developed for the GAK’s site.
www.gak-bremen.de