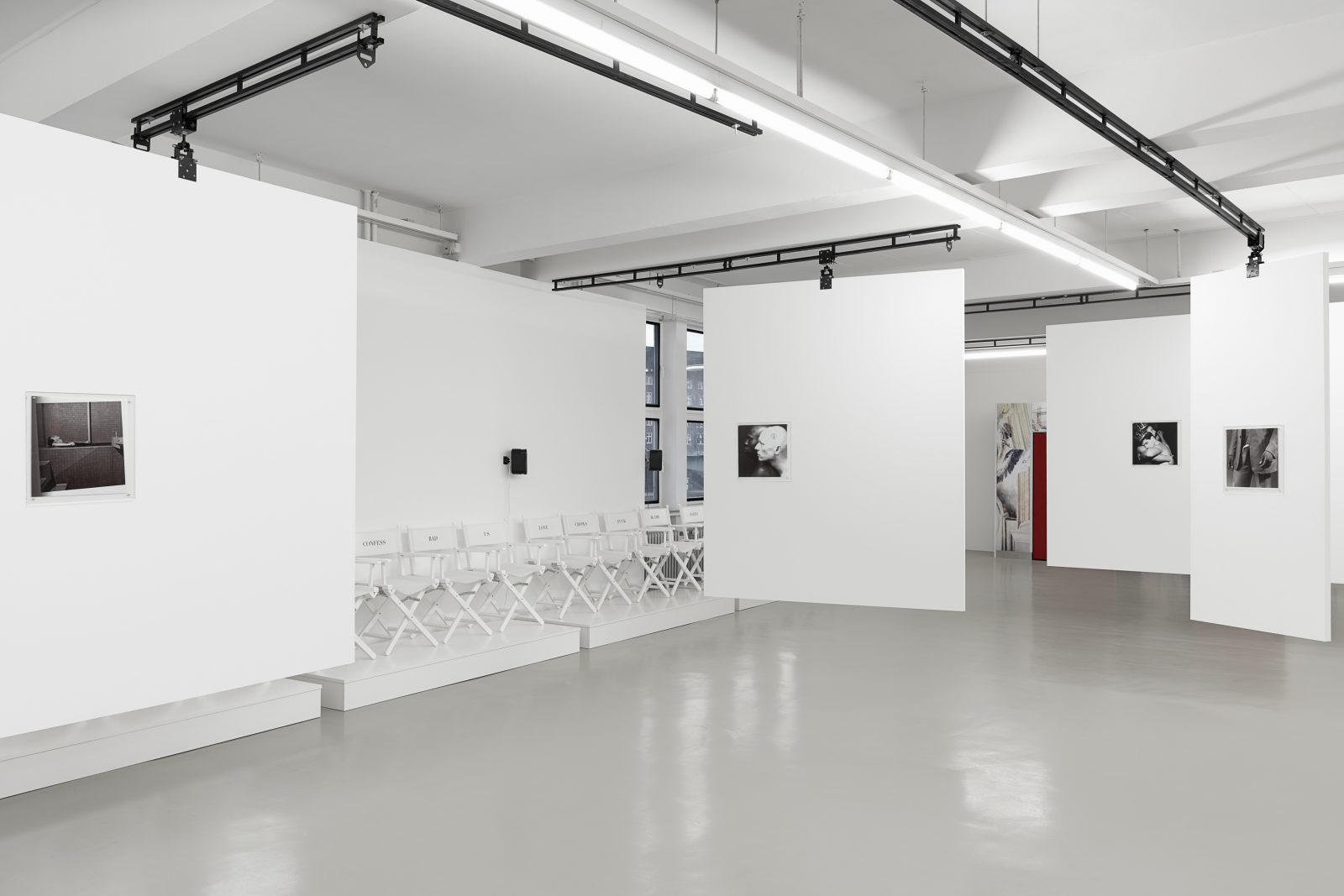 Than Hussein Clark
Exhibition view at GAK Bremen, 2017
Photo: Tobias Hübel
The work of Than Hussein Clark draws from multiple sources and offers an unusually eclectic appearance. The work’s influences range from theatre, fashion, crafts, literature or architecture to queer themes and issues about the conditions of artistic production and authenticity. His prop-like objects, set-design installations, and theatre-inspired performances initially yield an exuberant abundance of associations. However, examined more closely, it becomes evident that even the smallest detail plays a clearly defined role, and all the parts in their opulent totality interact with each other in a meaningful and precise manner.

For his project The Director’s Theatre Writer’s Theatre in Bremen, Clark folds together the recent history of the city with his own biography and the Theatrical Novel of Soviet writer Mikhail Bulgakov to develop an interdisciplinary project in several parts that finds expression in different formats and different locations simultaneously.

The starting point is Bremen’s central role in the development of Germany’s tradition of Regietheater or Director’s Theatre. In the 1960s, Kurt Hübner, the director of Theater Bremen, recruited directors such as Peter Stein, Peter Zadek, Wilfried Minks, Klaus-Michael Grüber, and Rainer Werner Fassbinder to stage theatre classics in the Director’s Theatre style, free interpretations of works, helping to establish the “Bremen style” of theatre. Than Hussein Clark contrasts this with his own training as an actor in New York and Los Angeles, more in line with the English Writer’s Theatre, which remains true to the script. In Clark’s project for Bremen, the contrast between the traditions of the English Writer’s Theatre and German Director’s Theatre and their different approaches to original texts ties in with his own commuting between the two countries (he lives in London and Hamburg). The project also incorporates his interest in production methods for both performance and the fine arts and what constitutes artistic authenticity.

The artist pursues these interests in exemplary fashion in The Director’s Theatre Writer’s Theatre, based on a novella written by Clark, inspired by Mikhail Bulgakov's Theatrical Novel. Written in the 1930s and somewhat autobiographical, Theatrical Novel tells the story of a playwright coping with the censorship of the Soviet theatre in the 1920s. True to the storyline, the satirical work was censored during Bulgakov’s lifetime and only published in 1967.

Clark’s text addresses these themes and will be published in daily instalments in the Bremen newspaper Syker Kreiszeitung and broadcast on Radio Bremen during the exhibition’s run. As such, the original text is simply just that. It is not being reprinted by a third party and will be read by Clark himself. In other words, this part of The Director's Theatre Writer's Theatre project figuratively corresponds to how the English Writer’s Theatre tradition remains faithful to the original text.

In the Schwankhalle Bremen, a production and performance centre for the performing arts, Clark’s novella will then be presented as a play, rewritten, designed, and directed by the artist. The piece stylistically borrows from Peter Zadek’s epochal production of Schiller’s The Robbers for Theater Bremen, in which “Franz Moor appears as a monstrous long-tailed monkey with giant ears, pudgy bandits spill copious amounts of fake blood, and the robber Karl poses like Superman wearing a super-jockstrap” (“Sehr extremes Stück” (Very extreme play), in: Spiegel, Issue 20, 1966). The performance caused quite a scandal in the German theatre world at the time and had a major influence on Director’s Theatre.

Finally, for the GAK Gesellschaft für Aktuelle Kunst, Than Hussein Clark uses objects, installations, graphics, displays, and historical material to repurpose GAK’s rooms into a theatre lobby, stage and backstage – but without staging any theatre or performance art. Clark is more interested in transposing the idea of theatrical staging onto his artistic approach and presents an art exhibition as a theatre performance. Through both a spatial and thematic progression, the symbolic lobby – made of objects, installations and works on paper Clark created for the event – functions as a sort of expectation space for the future performance.

Next, in the stage space, Clark will create a 6-part flexible display system (one for each day of the week when the exhibition is open), which he uses to present his interpretation of past museum exhibitions from artists of an older generation. Like a theatre director reinterpreting the classics for the stage, Clark pulls from the classics of the museum world, creating his own version for the display system. For example, one display offers a re-staging of the Robert Mapplethorpe exhibition in Washington’s Corcoran Gallery of Art from 1989, which had been cancelled due to “the dissemination of pornographic images”. Another display replays the 1925 Paris exhibition of the versatile Futurist artist Fortunato Depero, who was also the inventor of the Campari soda bottle. And another of the six displays is a tribute to a historic exhibition of Robert Rauschenberg. And so on and so on. GAK staff will rearrange the displays on a daily basis in a clearly defined sequence, featuring different exhibitions on different days, similar to the theatre where different plays are performed throughout the week. For example, Sunday will be “Mapplethorpe Day” or Tuesday, “Rauschenberg Day”.

Finally, in the backstage area, Than Hussein Clark will depict content from the Theater Bremen archive through the use of display materials designed and created by the artist. Specifically, he has chosen archive material (playbills, costumes, photographs, newspaper reviews etc.) from the legendary 1960s when the “Bremen style” evolved to become the epitome of German Director’s Theatre, ”chipping away at the plaster cast of German postwar stagecraft” (Matthias Heine, ”Wie Zadek, Stein und Grüber das Regietheater erfanden” ([How Zadek, Stein and Grüber invented Director’s Theater], in: Die Welt, 15.06.2008).

A book will bring together and present all three strands of the project: the publication of Clark’s novella in a Bremen newspaper and its broadcast on a local radio station; the performance in the Schwankhalle Bremen; and the new renditions of the historical exhibitions in the GAK Gesellschaft für Aktuelle Kunst through theatre-related methods. This book will be published in 2018 by Montez Press (founded by Clark in 2012) and supplements the extensive documentation of The Director’s Theatre Writer’s Theatre with texts, archive and research material, as well as the artist’s interviews with various participants, both from the past and present.

The Director’s Theatre Writer’s Theatre is not only Than Hussein Clark’s first solo exhibition at a German arts institution. Through its various formal strands simultaneously expressed in different structures, the project marks a new artistic approach for Clark, one he intends to pursue going forward.

Than Hussein Clark (born 1981 in New Hampshire, USA, lives in London and Hamburg) works as an independent artist as well as with the Villa Design Group, which he founded in 2011. He is also a member of the editorial board of the Hamburg-based Montez Press, established by the artist in 2012, which publishes texts “against current critical modalities and theoretical dogmas which inform the workings of contemporary knowledge economy.” After studying acting in New York and Los Angeles, he first completed a degree in art history in Edinburgh and London, after which he completed a degree in art at Goldsmiths College in London, and is currently finishing an MFA at the University of Fine Arts in Hamburg (completion spring of 2017 under Michaela Melian). He is represented by the Mathew Gallery in Berlin and New York, VI, VII in Oslo, and Karin Guenther, Hamburg.
www.gak-bremen.de