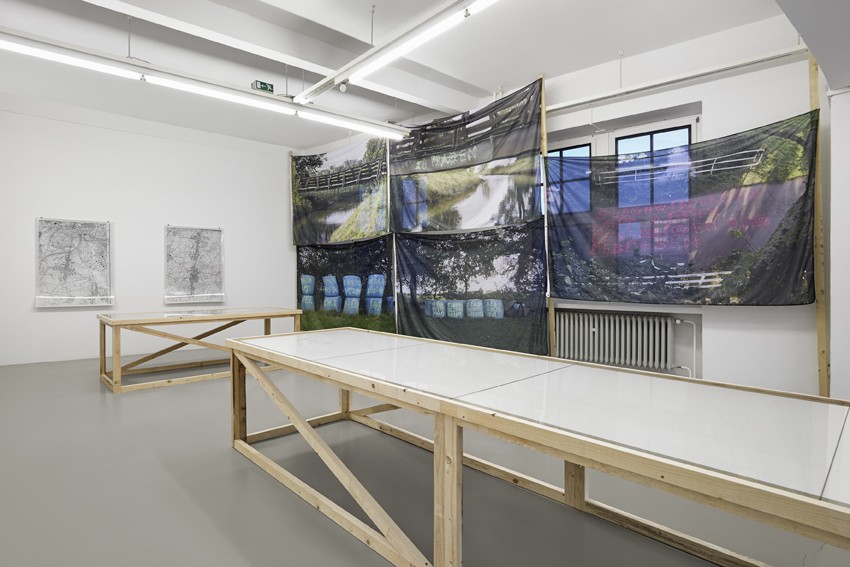 Till Krause
Exhibition view Briesener Zootzen
GAK Gesellschaft für Aktuelle Kunst, 2016
Photo: Tobias Hübel
Till Krause (* 1965, lives in Hamburg) explores the ways in which we interact with the surrounding urban and rural landscape, the impact of this interaction, and how new perspectives on this landscapes can be developed. Michel de Certeau describes in The practice of everyday life the city as a “text” written by its stakeholders, but one that they cannot read without taking a step back from it (University of California Press 1984, p. 93.). This idea, which regards the structures of the human environment as a text to be deciphered, corresponds exactly to Till Krause’s artistic practice. Our interaction with the urban and natural environment is governed by the way in which we use it for our own ends, and he scrutinises the seemingly everyday and familiar to reveal new ways of reading the urban and rural text. Krause doesn’t describe the manifestations of landscape and space, but the imagination of them, the social parameters that guide our perception of them. He refers to his art as “working on these parameters”. He takes the texts written and rewritten by social, historical and economic realities, makes their subtexts readable, and thus finds new ways of formulating them.

The exhibition Briesener Zootzen at the GAK Gesellschaft für Aktuelle Kunst concentrates on Krause’s multipart work Achse Kiel-Hamburg, and for the first time presents all its different elements together. In Achse Kiel-Hamburg he walked in an exactly straight line from the city centre of Kiel to his house in Hamburg-Altona. On the way, he noted different ways in which civilisation had made its mark on the landscape, and meticulously transferred these into large maps or handwritten records. For example one map shows the extent of mobile phone coverage on the route from Kiel to Altona, another maps the possibilities of the unobstructed view and again another lists the public areas along the way. Each of these detailed outcomes uses subjective experience within objectively defined parameters (the straight line and the mapping process) to create an aesthetically highly attractive picture of social realities, which we have never seen in this way before. To say it once again with Certeau: Krause reveals “the strangeness of the everyday”(Ibid., p. 93.), giving us a new view of the familiar and helping us to interpret it.

In 1850, Edgar Allan Poe published his story The Island of the Fay. This traces how our perception of a natural phenomenon, in this case an island in the middle of a river, becomes increasingly mysterious as a result of the narrator’s close observation and exact description, until ultimately it resembles a fairytale. The island is transformed by the power of his gaze, and transcends what he sees. Till Krause likes this story very much.
www.gak-bremen.de