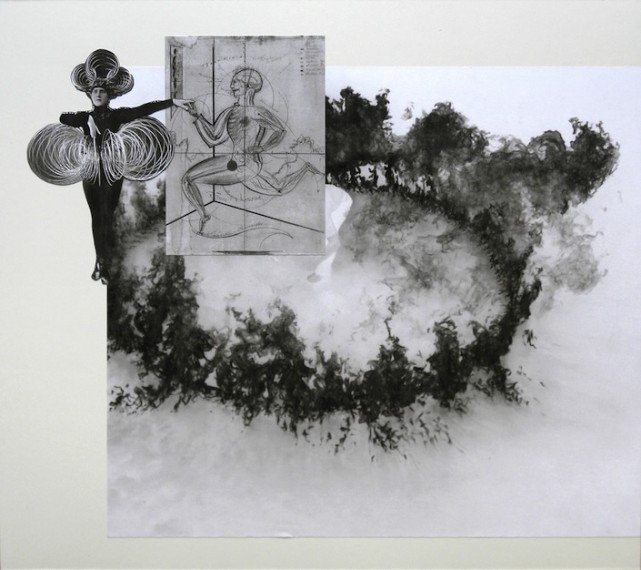 The Peruvian artist Gabriel Acevedo Velarde presents Escorpião e/ou Fotocopias de 1999 (Scorpion and/or Photocopies from 1999), his third solo exhibition at Galeria Leme. As suggested by the title, the show will be divided in two parts, being the first composed of a group of tables/sculptures in various materials and a video, and the second of a set of collages and prints.

The decision of dividing the exhibition in two reflects the feeling of division, or even opposition and clash, experienced by Acevedo as a Latin-american artist living in Europe. And in fact, the title alludes, even though in an open and basically metaphorical way, to post-colonial condition. The figure of the scorpion, in particular, is used as a mean to introduce the tale, openly false, of the scorpion, which, surrounded by fire, would commit suicide by poisoning itself. In Acevedo’s reading of it, the myth becomes a metaphor of a trans-cultural space, where several interpretations of the same concept can both live together or contradict each other. Thus, the fire circle and the circle the scorpion draws when stinging itself suggest a series of circuits in which mainstream and periphery reciprocally collide and feed the other. In the title, the artist also points to the fact that before Internet, that is, until the end of the 1990s, the only way, in Peru, to be acquainted with what was going on in the rest of the world was photocopying the few available publications.

Formally, the show is representative of Acevedo’s recent production, which is becoming more and more diversified. Despite the use of several medias and materials, though, both the tables that will occupy the main space of the gallery and the wall pieces relate to the ongoing stiffening of the modernist legacy in contemporary artistic production. Which is what explains the recurrent reference to Oskar Schlemmer, preeminent member of the Bauhaus, where he was responsible for organizing both parties and theatre and dance presentations. In other words, Schlemmer would provide a Dyonisian escape valve to the somewhat inflexible modernist purity, which at times seems, according to Gabriel Acevedo Velarde, to siege and suffocate contemporary society, as if it were a fire circle.