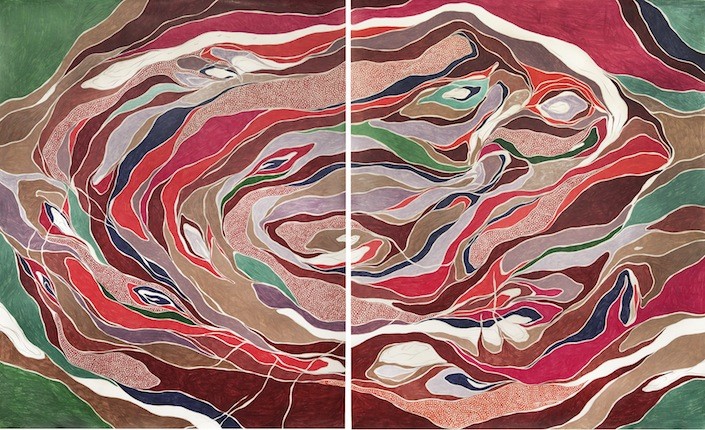 In her second exhibition at Galeria Leme, the artist Marcia de Moraes presents a new series of six diptych and polyptych drawings in large format. The works are made by divided papers that when put together reveal thoroughly drawn forms made by graphite and filled with colored pencils. One of the starting points in the creation of this series was making two different drawings become one single body, into a coexistence, which might be uniform or chaotic.

Lines and colors cross the paper limits, sometimes meeting an obvious continuance and other times meeting different elements. Inside the perspective of complementarity and opposition, Marcia punctuates other relations explored in her drawings such as cause and effect, attraction and repulse, reality and projection, introspection and exposure, movement and fixation, closeness and distance, feminine and masculine.

Forms and colors appear in an intense way in this series. In the works O Obsessivo and O Compulsivo, there’s a circular movement starting almost as in the middle of the drawing, irradiating to the paper extremities and establishing a labyrinthine and vertiginous rout. In Euforia the organic and winding forms take the paper as veins that strongly grow and pulse to the four points. In the work O Alagamento numerous paper pieces left in blank act as drops, dribble, lines and other elements, giving a great impression of depth.

Marcia de Moraes insists in the language of drawing, believing that the outline of the pencil brings delicacy and at the same time strength. Her works demand a great amount of time to be done and the slowness is part of the artists creation process. Her work seems to long for a utopian limit of the drawing. With varied chromatic combinations, dimensions that seem to increase at each work and now the fondness for polyptychs, the artworks become experimentations rarely imposed to this technique. All of her works suggest a question that seems to be her guide: which is, in fact, the limit of a drawing?