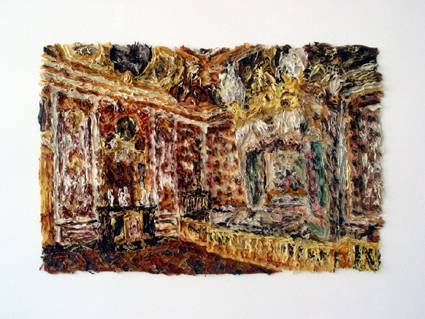 Camila Sposati, Brazilian - presents two different works originated from dolls and characters made by the artists– "Armas de Fogo"/ ( Fire Weapons ) , photo sequence where nine images shows white tack dolls simulating a dispute, and two sculptures made out of marble dust. About "Armas de Fogo`"/ ( Fire Weapons ) , Camila says: "I like to deal with borderline questions, in this work I question who is the aggressor and who is the victim, who is passive and who is active". Camila, 34, develops an important contrast of fragile and temporary materials. At the end of this almost documental sequence, the artist does not propose an answer for her questioning, but makes it abstract, in a poetic form, giving the audience a chance for a better reflection. In her sculptures, the marble dust resembles cake topping, with an acute sense of movement – the character, slightly monstrous, slightly deformed, does not scare, but apprehends us; the same effect is caused by its wooden base, which shows a nonexisting instability.

João Pedro Vale, Portuguese - Galeria Leme receives the young 30 year old artist as part of its residency program. João shows an installation intitled "Foi bonita a festa, pá"/ ( This was a great party ) , words taken from the first stanza of the political composition "Tanto Mar", by Brazilian composer Chico Buarque. The song thoroughly expressed the feelings generated by the Carnation Revolution (25th april, 1974), date which marked the smooth and pacific transition from the dictatorial portuguese regime to democracy. The work shows a jangada( brazilian boat used by fisherman in the Northeast of the country ) built especially for the show in the Northeast of Brazil, covered in beer bottle tops, amongst others of the Portuguese brand Sagres, same name given to the Portuguese school-ship and to part of country’s south region, which is the one most associated to the discoveries. "It’s like the boat and its memories were forgotten in the bottom of the ocean, covered in bottle tops", explains the artist.

João Pedro Vale is one of the most prominent names of the contemporary Portuguese art scene, using memory as one of his main allies during the creative process. In his trajectory he has already produced other works using boats, one of them recently displayed at the Pinacoteca do Estado de São Paulo, at the "Portugal Novo" show. João also evokes his native memory in the plates that he presents, made out of smoke packs of the Português Suave brand, name given to the ornamental Portuguese architecture constructed during the military regime. The patterns of the plates reference the iconic 18th century tiles. The works are flourished by words taken from popular Portuguese and Brazilian poetry, respectively of writers Augusto Boal and Fernando Pessoa. As in the baroque movement, the works presented by João Pedro Vale expose social contrast through the unification of body and soul, like the erudite and the popular.

Friederike Feldmann, German – the artist shows four different works from the intimate and poetic "Zimmer" ("Rooms") series. The images consist of reproductions of the most luxurious palace rooms, environments which, according to the artist, contain auras and status which make them adequate for reproduction through painting. These are the rooms of the King, the Queen, and the "Millionezimmer" ("Millionaire room"). One of the pieces also shows Marie Antoinette’s room (1756-1798), last queen of the ancient French regime. Friederike mixes silicon and acrylic paint (as pigment), and works with a bag similar to the ones used for decorating cakes. The result is an image filled with a sense of movement and light contrasts. The sinuosity and the excesses of the baroque movement, nowadays still reverberated in artistic production, appear more clearly in Friederike’s work. Her paintings do not render only to expression; its grandeur finds itself in the slow and patient transformation of reproductions.