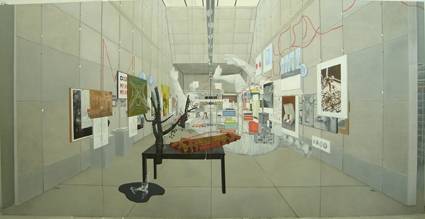 In his first solo exhibit at Galeria Leme, Paulo Almeida presents exclusive pieces which were made during December 2006 and January 2007, in the artist studio in front of the main gallery.
The show is composed of a large scale painting showing the gallery space from the point of view of where the canvas is located. This work has been repainted with all the exhibitions which occurred since the opening of Leme(17.11.2004), until the show which anticipated this one (13.01.2007), based upon its photo archive. The result sums up 17 interferences on the same piece.
The dinamics of the paintings are also explored in the Palimpsestos series, shown recently at group show Rumos Itaú Cultural (2006), which presents the latest trends in brazilian contemporary art, as well as in Paralela (2006),which occurs alongside the Biennial. In this case the work which is represented remains at a fixed point, overlapping the ones which occupied the venue.The work, with its analogous track, reproduces not only the image but also its functions.
On the other hand the gallery goes through the condition of receiving works which shall become part of the painting, placing opposites and contrasts with the full screen which shows plentitude (Arman), and the empty space (Ives Klein). Altogether, giving continuity to the gallery's space projection, reinforcing the relationship between spectator and work of art,placing each individual in the limit of these two situations.
The upper floor will be occupied with smaller scale paintings which dislocate the representation of gallery walls with works selected randomly by the artist and which occupied this area during a determined period of time, as suggested by Paulo.