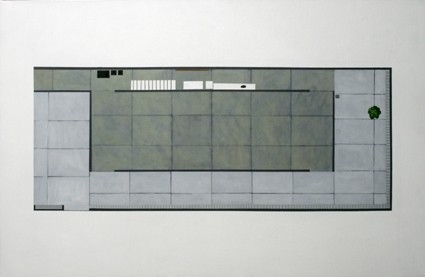 Thus, theartist doesn’t paint in search of a perfect image or to illustrate anidea - something that, at a certain point, can be considered finished-, but to develop a project. Paulo Almeida produces his canvasesaccording to specific space and time.

The term “individualsimultânea” (simultaneous solo exhibition), entitles the show andartist has taken a conscious decision of using it in the singular. Itmakes reference to exhibitions, in which two artists held their soloshows in the same space, at the same time.

The exhibitions thatPaulo Almeida will have at the project room together with DavidBatchelor’s show at Galeria Leme, though, consist on the contrary: thesame show will be held in two different spaces, at the same time.

PauloAlmeida has already prepared two large scale and various smallercanvases, in which Galeria Leme’s empty space is illustrated fromdifferent angles. As soon as Batchelor’s show is ready, Paulo Almeidawill add to these pieces the luminous sculptures of the British artist,reproducing his show at galeria leme’s project room.

With thisproject, Paulo Almeida intends to look at representation throughdifferent points of view, explore concepts of space and question theway exhibitions are held, as well as the public’s expectations.