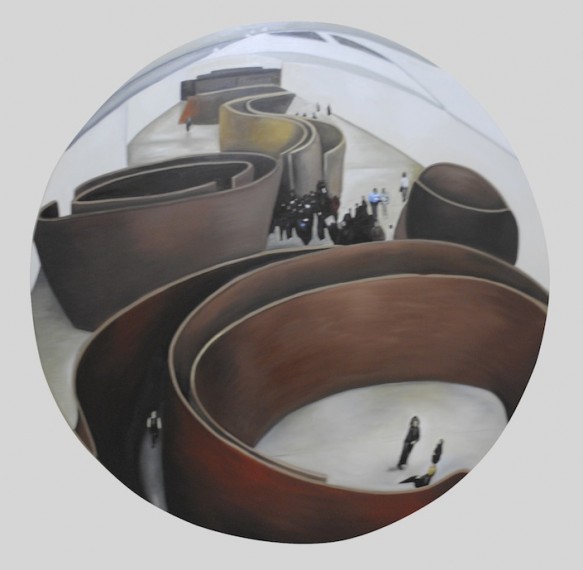 In his third solo show at Galeria Leme, Paulo Almeida presents Reflecting the Museums, new series of circular paintings simulating big convex mirrors normally used in security systems. In this case the works reflect the indoors of some of the most respectable contemporary art museums in the world, with it’s imposing architecture, questioning his role in the mediation between the artwork and it’s observer.

In his former series, Palimpsestos, the artist had already approached his production context in representative works of the exhibition spaces, once he dislocated himself to these spaces to visualize and create the works. Paulo Almeida develops a widely conceptual and procedural work with a close relationship with the environment that surrounds him -­‐ perceptibly the art. In his production, the artist appropriates conceptually from every means and supports in contemporary art; photographs, videos, performances, installations and others, positioning himself critically in the art system and adding new values to the static character of the painting.

With works permeated by metalanguage, the artist keeps an ongoing investigation and safeguard of history -­‐ recent or not -­‐ of the place he exhibits or that exhibits him, once the space represented by the artist is also the space that shelters his work. Paulo Almeida constantly incorporates new strategies and gives the painting a wide site-­‐specific character, once it’s adept to a specific production context of each work.

In times in witch we erase the old to get to know the new, Paulo Almeida questions, in material aesthetic expression the means for preservation and exhibition of contemporary art by the representations both of exhibitions and the artworks that integrate it.