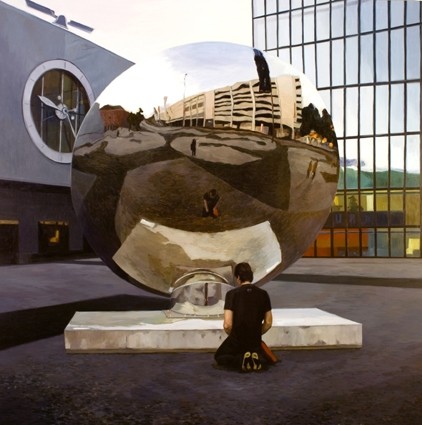 The Madrid-based Peruvian artist, founder of the fictitious and virtual museum LiMac, will present at Galeria Leme “Milagros”, her second solo exhibition in São Paulo. This time, Sandra Gamarra will transform the gallery’s exhibition room in an ecclesiastic space, in order to establish parallels between the artistic and the mystic experience.

“Milagros” consists in 13 canvases, “Nimbos”, a sculpture made of areolas, and “Salmos”, a sound installation. These canvases, created from photographs that the artist has taken in galleries and museums around the world, show one or more spectators observing works of art. “Nimbos” and “Salmos”, in their turn, contain elements of the religious universe that, dismissed from their original function, generate new tensions between the mystic and the aesthetic.

These pieces belong to the series “Novos Oradores e Novos Peregrinos”, in which the artist makes reference to art spectators, to art spaces and to the public’s peregrination towards galleries and museums.

For Sandra Gamarra, more than understanding and appreciating, a spirit of witnessing predominates. The spectators situate themselves in front of works of art with the intention of making contact with a truth that sometimes dodges and, at other times, is impenetrable.

Observing works of art is, before any political or philosophical reality, an act of faith.