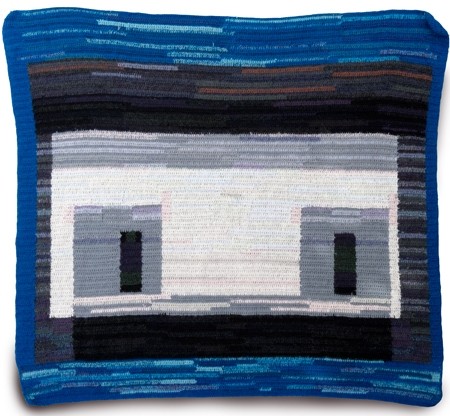 The Madrid-based Peruvian artist, founder of the fictitious and virtual museum LiMac, will present at Galeria Leme “Mantles”, her third solo exhibition in São Paulo. Will be showed 14 paintings on canvas, two series on paper, 10 textiles and a video.

Can art be used to create and recreate a personal story, beyond historical truth?

Putting together diverse sources from art history and family imagery, the artist creates a collage where the intention of the appropriated art images becomes subsumed to its recounting.

Taking after the quilts woven by the artist’s grandmother, a Japanese descendent who immigrated to Peru. Sandra Gamarra uses paint, textile, and video as mediations of this narrative. Bordering cold and rational historiographic discourse, the exhibition introduces a certain relationship between contemporary art underline the influence on minimalist painters such as Robert Mangold, Mark Rothko, Barnett Newman and Ad Reinhard, pre-Columbian art with geometrical compositions of peruvian textiles , and Japanese aesthetic, only to later deconstruct it from an intimate and more personal perspective.

The exhibit is a grand collage, where images appropriated via painting (the artist’s signature) combine with textile and narrative, in a collaborative work with writer Ximena Briceño.

Self-recognition is the main theme in this exhibition, where one weaves and unweaves her own image.