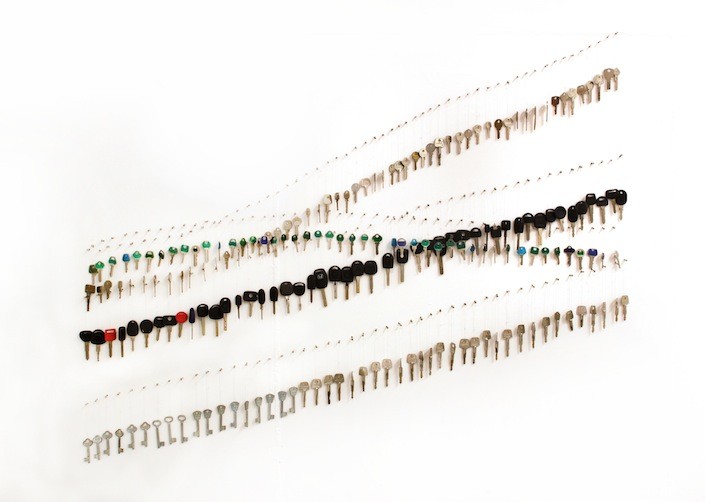 Path, hole in the wall

We were 16 queued and silent people. Almost motionless, we faced the heart of the central air-conditioning system installed at the basement of the Museum of Modern Art in Rio de Janeiro. After some time, while the condenser gushed hundreds of gallons of water from its huge waterfall of green metal, some closed their eyes, others sat on the cold ground, and others began to move down the long, damp corridor. We were at the heliport at Santos Dumont building terrace, one of the tallest buildings in the center of Rio. Alone up there, we could see the Sugar Loaf, Marina da Glória, the Flamengo Park, the Praça Paris, the Gustavo Capanema building and part of the Lapa neighborhood, besides the movement of thousands of cars, buses, planes, people and birds. We were walking on Avenida Chile in front of the Petrobras Headquarters and then reached the monumental São Sebastião Cathedral with its conical shape, concrete walls and stained glass. We were in the camelódromo of Presidente Vargas Avenue. We were in the park Campo de Santana following employees of the City Hall that fed the peacocks, ducks of the woods, geese and agoutis living loose on the site. We were in the side chapel of the Monastery of São Bento, impressive Baroque treasure of the sixteenth century, hoping that the church bells would sound announcing the beginning of the Mass with special prayers sung in Gregorian chant by the cleric choir. We were silent together and willing to listen to the world, 10 hours had passed when we said goodbye. It was the 28th of September 2012, and that was only the first of the Caminhadas Silenciosas (Silent Walks), a project that Vivian has been developing for three years.

Since then, there were more than 20 different circuits in six cities around the world, always with the same model, Caccuri invites a group of up to 20 people to walk together in silence for a particular and special path for up to 8 hours. In these routes, there is a moment in which participants eat together, and there may be a moment in which the artist produces sound effects with small microphones, a portable amplifier and an effects pedal.

The course of the experiment gradually changes the perception of the world’s structures within the people of the group and thereby also transforms their reactions (thought and movement) to reality, especially by provoking an almost meditativeness of hypertension that converts the walkers into researchers of sound, spatial and relational details. The conditions imposed by the work (being together, walking and not talking) gradually introduce the participants into a humble and generous positioning. In moments of contact with the speaking world, also comes a strong and interesting sense of community shared by people who might not previously know each other. From each investee (and itinerant research processes previous to the action), Vivian brings many discoveries.

The exhibition “Condominium”, the artist’s first solo show in São Paulo, at Galeria Leme, from May 7 to June 13, 2015, brings together the experiences and discoveries from Caccuri’s Silent Walks, together with the artist’s latest and obsessive research on the physical and social structure that manifests itself conceptually as “condominium”.

Thus, the exhibition presents works that make use not only of theories on urban space, sound and society, but also materials found in the walk. This is the case, for example, of the Pagode series in which the artist manipulates different types of plastic sheeting (as used for protecting construction sites, facades of buildings under renovation and screens) as well as fractions of metal bars used to make railings, and glass bottle shards such as those cemented on top of walls in order to prevent intrusions. All of these materials have been repeatedly sighted during the silent walks, however, reversing its regular use (to prevent movement and curtail gatherings), the works of the Pagode series are designed to be activated by the public, individually and collectively. The objects that hang from the vertical wires are tuned to be played as musical instruments and thus stimulate the movement and the gathering of people. The titles of the works from this series (Garden, Window, Flag, Brutal, etc.) reference architecture expressions.

Another work in this exhibition, that also uses materials disclosed in the silent walks, is My Mistake 2, which unfolds from the research enhanced during the artist’s residency at Pivô in 2014.

Vivian came across discarded keys from the key-makers in the Center of São Paulo, due to defects or failure in the recording of secrecy, and these small metal objects, reused, are hung on nylon threads and attached to nails so that, if touched by the public the work also achieves a sound effect. The tracings formed by the lines of keys on the walls are reproductions of economic research and opinion charts.

The object titled “Adeus” (Goodbye) is composed of a mini sound system with microprocessor devices, FM receivers and antennas, that are able not only to tune radio bands but also to perceive movement. The closer people are from the metal antennas, the more sensitive they become to the FM waves, thereby producing less noise in the decoding of electromagnetic signals and, consequently, more precision in its transformation into sound waves propagated by the environment. The work highlights the important relationship, in the Walks, between movement, perception of sound and different territories and domains, here as a metaphor expressed by the various FM stations.

For the works of the Bias Project (Visage), Vivian returned to the shade under the century-old fig tree in Campo de Santana Park where the walkers once rested, on that first Silent Walk in 2012, watching the peacocks and agoutis being fed. This time, the artist had a small team of assistants and carried a mobile photo studio, a poster that read “Exchange your picture by one bottle of water ” and a cooler with a few hundred bottles of water. For five hours, Caccuri held the exchanges of the water by frontal photographs of the faces of several interested bystanders, and later processed these portraits using one of the first technologies of facial recognition, called Eigenface. This technique usually overlaps several pictures of the same person to create a spot that becomes a kind of facial fingerprint. For the work of this series, Vivian digitally added the shapes of hundred different people’s faces (the thirst for water worked as a way to reach the most diverse audience possible), creating a ghostly image that, by not relating to a single real equivalent in the game of representation conceptually points to everyone portrayed. In an exhibition that thinks the condominium, this work, like the others present in the show, serves to add complexity onto the investigations into this type of architectural organization of society whose main objective, to delete what is outside its walls and separate what is within its land boundaries so that there is no room for error, chance or indeterminacy.

Walls always fulfill the function to create, define, places from the materialization of a physical limit that is symptomatic of an imbalanced demand of power in society. If it is on the walls that manifestations of social and political criticism have long been expressed it is because they represent and are the separation between people and between groups: a restriction to living, to flows, exchange and therefore to change. In this exhibition, it is as if the wall was grafittied with wall paint, and the possibility of activating the works reminds us of the chance to change everything. The openness that the sound of these works creates metaphorically on the walls, is an even greater openness: to affect and be affected.