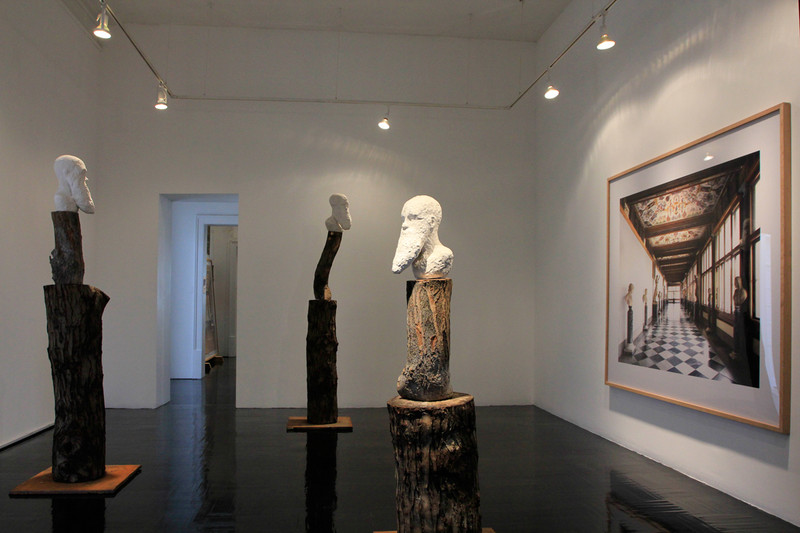 In language, the purpose of a footnote is to support and add reference, which expands on the significance of the text. Like footnotes, the works of Daniel Silver, Theo Michael, Erwin Wurm, Jose Dávila, and Jorge Méndez Blake bring forth a new context and dialogue to the photography of Candida Höfer, shifting her work out of its inherent two-dimensionality thereby permitting its wider meaning to be exposed. Each room acts as its own conversation, highlighting not only the multiple layers – both formal and conceptual – to Höfer ́s work, but simultaneously granting us an insight into the preoccupations of Silver, Michael, Wurm, Dávila, and Méndez Blake ́s own works.
Candida Höfer ́s signature aesthetic, created by her use of formal similarity and emphasis on perspective, often forces us to overlook the strong conceptual practice underpinning her work. The German photographer’s time in Florence capturing the Uffizi shows her fascination with the concept as well as presentation of culturally made objects in space; an artwork within an artwork. Daniel Silver reverses this idea through the selection of his busts, seemingly allowing the artwork to come out of the photograph, thereby extending the perspective created within the picture plane and producing a new sense of spatial awareness to be felt.
Theo Michael ́s installation of the entirety of his studio as a response to Höfer ́s photograph of the Villa Stuck, re-iterates the concept of spatiality, inviting the viewer to actually inhabit and experience a space, in contrast to Höfer, whose method transports the viewer to a place whose physicality can only be imagined.
Candida Höfer ́s photographs of the storage units in the Museum für Völkerkunde Dresden highlight the ghostlike quality prevalent throughout her work. The large-scale format and subsequent detail – a constant in her practice - allow the colors of the storage boxes to overwhelm the viewer with life, and yet somehow human life is missing. Erwin Wurm ́s fountain and Jose Dávila ́s sculptures – together an immersive presentation of human limbs – further brings to light this emptiness of human presence within Höfer ́s work. Ironically, it is this lack of human presence that finally creates it, exposing the psychology of our social spaces that are otherwise often overlooked, deepening our understanding of how, and therefore who, we are.
Jorge Méndez Blake, on the other hand, was drawn to Trinity College Library Dublin V 2004, by Candida Höfer, because of a geographic relation between this and his two works exhibited at the show. Monumento a James Joyce and his in situ mural Sin título (Joyce's Goldenhair) reference the master work of James Joyce, Ulysses, which narrates the passage of the main character Leopold Bloom during a day in the Irish capital, birthplace of the writer and hometown of the Trinity College Library. Through this relation, Méndez Blake focuses on the how of who we are, in terms of the role our culture plays in our formation. For him, the library is simultaneously a storage and disseminator of this culture and his works present the visual results from this dialogue with culture, contrasting with Höfer ́s photograph, which is a demonstration of how culture is presented, not formed.
Footnotes on Candida Höfer not only grants a wider perspective of Höfer ́s work but also adds footnotes to the works of Daniel Silver, Theo Michael, Erwin Wurm, Jose Dávila, and Jorge Méndez Blake. The dialogue between the different media, photography and sculpture engages us to see greater possibilities inherent in each one, allowing for a deepened sense of communication, meaning and understanding to be brought forward overall.
www.galeriaomr.com