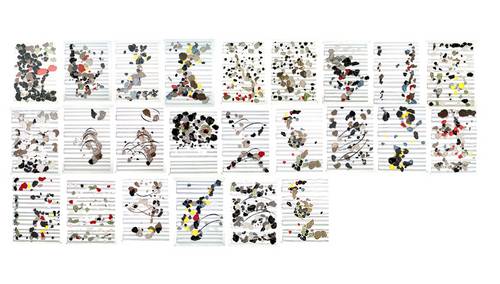 OMR is pleased to present Pablo Vargas Lugo’s exhibition Ostinato & Cantabile.
Ostinato & Cantabile is an exhibition of recent work by Vargas Lugo (Mexico City, 1968) who, for the past fifteen years, has contributed significantly to the realm of collage, drawing, installation and sculpture.
The diversity of media that characterizes his oeuvre results in the articulation of complete harmony between concept and material, an outcome that could appear to be illogical. The artist turns elements and situations from daily life into absurd objects. He modifies a common cement sidewalk or stretches a clothes dryer to a height of 3 meters, which, through a simple procedure, becomes an image of a night sky.
The works entitled Ode to Joy (fragment), Requiem (fragment), (2005-2006), are groups of musical scores whose notes have been expelled from the paper by an infinite number of colored rocks, lightly floating above the pentagrams, patiently awaiting interpretation. Likewise, the hieroglyphics on Bonampak News (2005-2006), a few newspapers thrown carelessly on the floor, seem to be expecting a reading that was hundreds of years in coming.
The word Cantabile in the title of the show, confirms the possibility of interpretation in the works. Ostinata, on the other hand, is the Ptolomeana (solar stain) (2005-2006), two pieces of sidewalk that continually turn like a merry-go-round made of urban materials, suggesting the movement of the stars and the imperfections of the solar surface.
In Ostinato & Cantabile time is the central theme; trapped, on one hand, by the possibility of interpretation of the melodies that are expecting to be sung, and measured, on the other hand, in the movement of the kinetic pieces as they are set in motion.
The show will be open to the public until April 18 2006.