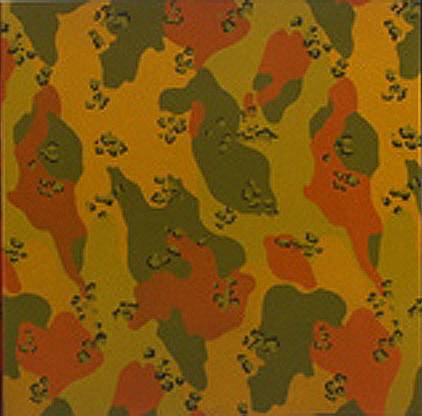 OMR is pleased to present the exhibition Distancia táctica (Tactic Distance) by Rubén Ortiz Torres.
Over the last two decades and utilizing diverse mediums and materials such as painting, installation, baseball caps, fixed cars, 3D films, etc., the work of Ortiz Torres (Mexico, 1964) has explored the spaces between popular culture and the not so popular.
In art as well as culture meaning is in dispute, and on this occasion, formal purisms and abstraction have been inoculated and converted into Trojan horses.
Ortiz Torres presents a series of “abstract” paintings that in their making show a collision between automobile culture and the sublimity of purist abstraction. So, those that appear to be monochrome paintings, in reality are not, though sensually transmute saturated colors depending on the spectator’s point of view.
Using new materials and technology, and to put it in his own words, Ortiz Torres, “intends to create a work capable of transforming itself and responding to different worlds and realities, recognizing that our identities are always fluid and changing.”
The new digital camouflage utilized by various armies in the Middle East generates the illusion of multiplying their original colors into a “tactic distance”. Inside of this we find ourselves drawn to unwholesome beauty as a response to “universal art.”
Rubén Ortiz Torres lives and works between Los Angeles and Easter Island.

OMR is pleased to present the first solo exhibition in Mexico by Gabriel Acevedo Velarde, Sinapsis 1 (Synapse 1).
The work of Acevedo Velarde (Peru, 1976) has been characterized by representing a very peculiar vision of the world and the human condition. Employing different mediums like drawing, animation, performance, or fake documentaries, Acevedo V. directs scathing criticisms to the contemporary world, recognizing his complicity in it as one of principal premise.
On this occasion, Acevedo V. presents a series of animations and drawings, which appear to be looking for an ideal mode of existence, perhaps more clearly configured in the character that repeatedly appears in his pieces. In spite of the utopian nature of this search, the “margin of error” is the territory that the artist has decided to explore.
In this sense, Acevedo Velarde’s work depicts satiric excesses of egocentricity, an enthusiastic faith in scientific knowledge, compulsively repeated traumatic situations, and a sexual energy, which is at once corrupt and harmonic. Such content is visible in animations like “Exterminio” (Extermination) (2006), where a couple flies over the entire planet systematically destroying populations, bombarding sperm.
One of Acevedo Velarde’s concerns is situating himself between two particular opposites. For example, on the one hand the respect for nature’s order and on the other, the irresistible desire to manipulate it. Despite considering that large catastrophes prompted by man originate in scientific advances, the artist’s work acts simultaneously from both positions.
Gabriel Acevedo Velarde lives and works between Mexico City and Sao Paulo.