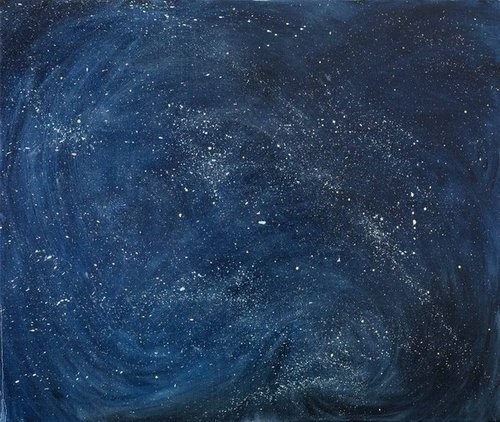 Agnieszka Brzezanska photographs, films and paints images that surround her in daily life; images that come across her gaze and in which she perceives a particular significance. Non-hierarchically juxtaposed, these diverse works illuminate an interpretation of reality without intending to manifest something overt. Agnieszka Brzezanska’s world is an enigmatic one, which, depending on the medium employed is presented as more or less abstract with great simplicity and beauty.

In the exhibition “Venus Conjunct” the artist directs her gaze to the starry sky, focusing on the celestial bodies most visible from earth: the moon and Venus. The immense field of the invisible and unexplainable within the galactic system is thus opened. Her photographs record discovered constellations, which were previously concealed, creating relations between the earth and sky. In one such photograph, the moon is visually rhymed with the bulb of a street lamp, seeming to insert itself into a row of similarly formed structures. The street lamps could, obversely, be seen as duplications of the moon.
Meanwhile, Brzezanska’s paintings become visual delegates of abstract and imperceptible phenomena in the universe. The images have no beginning, no end, no center and no representational source. Blue color is applied in spirals and strewn with white daubs suggesting a section of sky, which simultaneously foregrounds the construction of this illusion. This interplay is a constant in the media used by the artist and raises the question as to whether the paintings might also harbor hidden "pictures” or if the photographs represent nothing that is visible from this world.
Agnieszka Brzezanska ‘s film “Paris” sums up these possible discoveries. A peephole in a poster, which displays a beautiful model, both focuses the sun and allows to pass its star-like rays. This little sun – the peephole – thereby comes to life and finds itself on the brow of the model, marking at the same time the coincidence of cosmos and world. Yet the subtle humor of the artist arises, as when she exposes procedures and lays them open for the observer: the shaking and zooming of the camera, the becoming of the reflexion is most terrestrial.
In spite of all these revealings and discoveries, when these gentle works examine themselves to such an extent, they evoke an atmosphere of the metaphysical and spiritual, calling into question what we see and what we believe that we see, or rather: whether we believe in the unseeable. One feels compelled to rub one’s eyes. Agnieszka Brzezanska invokes the canon of theories, doubts and beliefs regarding cosmic order and the influence of planetary life on our existence. She leaves her own position ambiguous, allowing her work to open up a world whose elusive mystery elicits a sense of longing, and which continually culminating in the question of the human being’s destiny in the face of the galaxies’ dramas.
www.galeriekamm.de