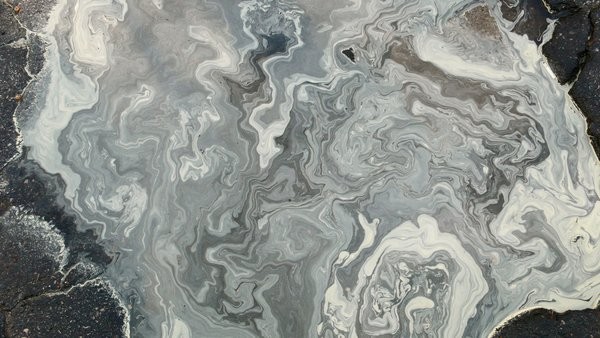 “Trees have long thoughts, long breathing and restful, just as they have longer lives than ours. They are wiser than we are, as long as we do not listen to them. But when we have learned how to listen to trees, then the brevity and the quickness and the childlike hastiness of our thoughts achieve an incomparable joy. Whoever has learned how to listen to trees no longer wants to be a tree. He wants to be nothing except what he is. That is home. That is happiness.” Herrmann Hesse, excerpt from Wanderings, 1918.

Agnieszka Brzezanska photographs, films and paints pictures of her daily surroundings in which she sees a particular significance. In her second solo show at Galerie Kamm Brzezanska takes on the idea of a return to a place of rest and nativeness and the relationship between humans and plants.

The installation of the show with large-formatted prints hanging from the ceiling of the gallery space, a photograph placed on the floor and a sculpture in the space, creates the overall allusion to a forest. Leafs and tree branches – painted, photographed, filmed or computer-generated – serve as the common motif that tie the pieces together. They cover up a nymph-like creature, for instance, or seemingly form an entity with the movement and colour of human hair. Two unconventionally installed paintings, leaning against each other may recall childhood memories of building a “hut” as a hiding place in play, following a natural instinct. The film, which is screened inside it, formally echoes the fragmented image of the leaf-covered photographs. It shows a sequence of an open-air screening of a performance by dancer and choreographer Pina Bausch, which Brzezanska filmed with a simple digital camera from the window of her studio. In the background, the orchestral tunes of Sacre du Printemps by Igor Stravinsky are heard.

In this exhibition one comes across objects, images and sounds that can be surprising, humorous, mystical or even uncanny – much like in nature. While the works evoke an atmosphere of the metaphysical and spiritual, Brzezanska always manages to maintain a clear view and precise technique in her pieces. Leaning on theorists like Stephen Harrod Buhner, she calls into question our own position within the natural order, reviving the canon of theories and debates regarding the human being’s relationship with nature. In The Lost Language of Plants (2002) Buhner describes how man’s emotional disconnection from the Earth and plants causes a loss of health in ecosystems as well as a loss of “understanding of who we are”. In the communication with plants thus lies a healing power and potential source of joy that modern society has widely disconnected from. By taking the viewer back to the garden, Brzezanska opens up the realm of questioning our own relationship with nature,possibly taking a first step to reconnecting and communicating with it. As the Canadian painter Emily Carr observed in her life-long pre-occupation with nature: “Trees love to toss and sway. They make such happy noises.”
www.galeriekamm.de