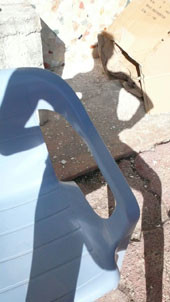 
Abstractions founded upon bodily forms, absurd constellations in which bodily fragmentations emerge, objects that become elementary – Act so that I can speak to you depicts a world made up of its own distinct bodies and signs. This world can be part of the real world, visible or concealed, or a world of pure imagination and ideas. Or it can be composed simply of the traces left in space, without the presence of the visible human body.

TOM BURR’s theatrical objects move between sculpture, catwalk and set-design. Made up of articles of clothing, mirrors, chairs, books and other traces of human interaction, these constructions attest to past moods and emotions or serve to exhibit memory as such. At the same time, they are “desperately seeking to have some relationship to the figure, to bodies, perhaps to an identity.“ (Tom Burr, Artforum Feb 08)

The concept of clothing as a substitute for the human body is also central the work of KITTY KRAUS. Ironed and deconstructed suits are the point of departure for a series of her work. The unraveling of stitches, cutting apart of edges and the reorganization of the separate pieces of material likens an act of liberation and analysis. Released from their function of clothing the human body, they are reduced to their essence – form and material.

In MICHAEL QUEENLAND’s installation and most of the other works included in the exhibition, one finds a performative aspect. In the installation Standing Brooms Until All or None Fall Over, a group of brooms balances on their bristles until they topple over. Alluding to failure, transience, fall and happenstance, this performative balancing act allows the brooms to appear as individual, corporeal beings, whose formation is in a permanent state of movement.

ANNETTE RUENZLER’s sculpture Tanzbein is an abstracted leg fraught with material and form, hanging in a mobile metal frame. Although the work is fragile, the materiality of the leg recalls stone. It thus refers to both the art historical tradition of classical sculpture as well as its aesthetics of beauty as they relate to the presentation of the body. While the latter seeks to represent the harmonious, however, this installation offers a dry view of a social structure: a view transcending physicality.

In ANETA GRZESZYKOWSKA’s film Black, the body is confronted with absence, invisibility and disappearance. The naked body travels through an endless black room into which it vanishes, only to return again. The artist plays with her own identity in a multilayered game, while examining the role of the media of film and photography in both capturing and creating human identity.

KATHRIN SONNTAG, however, is more interested in photography as an uncanny, ghostly activity. In her slide series Mittnacht, found images of people said to have been involved in paranormal events are combined with apparently random compositions arranged and photographed by the artist. The piece becomes a stage for subtle irritations that allow traditional categories of function and perception to become unhinged.

A state similar to 4 in the morning, the hour that inspired MARIA LOBODA’s exhibition piece. Upon close inspection, a shelf emerges as the text 4AM, and the objects it holds appear as fragile remakes of the seven basic forms constituting the world, as defined by the Bauhaus.

“It is that special time early in the morning, when the body is tired but thoughts turn in strange spirals and the world becomes unhinged. The elements of this world, the elementary forms of all objects that surround us and hence surround our bodies, objects either created by mankind or occurring naturally, fade into fragile puzzles, the world one knows becomes unknowable and abstract.“ Maria Loboda
www.galeriekamm.de