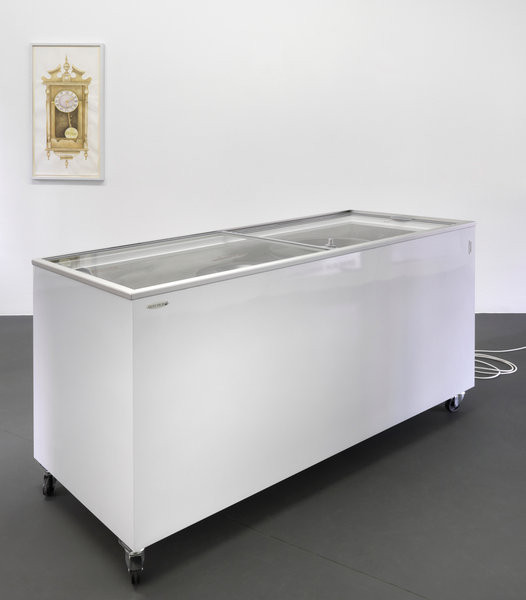 If something comes apart, is bent out of shape, gets out of joint as it were, one is surprised or bewil-dered, maybe even annoyed. The group exhibition “out of joint” gathers works by artists whose strength it is to use exactly this procedure as an artistic strategy. The works are abundant, theatrical, unex-pected, absurd, puzzling or humorous, some make you blush, others lead you onto the wrong path.

Using all kinds of material and media each work is a complex entity calling an extraordinary and unique physical presence its own. All of them seem to represent a deep insight into a personal space as well as to form a statement on a collective knowledge. In their dynamic these works cannot be forced into rigid structures or be easily described. They continuously reject conventions and expectations, push back boundaries and move ingenuously in the conquered areas.

JAMIE ISENSTEIN’S work blurs the line between object and body. In the exhibition the artist shows works in which fingers can be seen in absurd constellations with objects. In a series of watercolours fingers are stuck into the arms of candelabras, are the hand of a clock or they are arranged like the keys of a piano. In the installation Finger Candelabras made of bent candles which are standing in two can-delabras on a table cloth, the candles seem to communicate with each other, much like people sitting opposite each other on a table having a conversation.

THOMAS KRATZ uses found motifs from popular culture like the Smiley and pictorial compositions from paintings by Balthus in the exhibited paintings and drawings from the series Me Me Me. Like this he avoids pictorial decisions in order to concentrate on the surface, a key topic of painting. Indian ink that is poured through the canvas makes the figuration flow in the actual sense and the motifs seem to van-ish into abstraction under the many layers of colour. The images don’t tell a story, the faces and figures seem secluded and become a raster of an artificial world that seems somewhat familiar to the viewer.

GABRIEL KURI’S installations are obscure, collage-like combinations of everyday objects. Through a spatial and temporal dislocation of the found objects he creates works that deal intensively with the relation between object and space. In the work Untitled (Three Frozen Fire Proof Voids) Gabriel Kuri has placed three different sized black waste paper bins, whose inside is covered in black velvet, into a com-mon freezer and hence has spatially interlinked these objects. Both objects were made unusable and are standing in the room as a merely formal fact. The absurdity of this new situation is mirrored in the work’s title.

MICHELE DI MENNA’S colourful, amorphous sculpture Schatten is a three dimensional representation of the artist’s shadow as photographed during a performance with no audience. Black and white photography was the sole mode of recording the event. Only the resulting sculpture combines the movement, drama, and colourfulness of the prior performance, and allows us to imagine what is no longer present. During the opening of the exhibition Michele Di Menna once again performs with her three dimensional shadow , highlighting ephemerality and fluidity in her work.

PAVEL PEPPERSTEIN’S film Hypnosis shows the same scene again and again but with different actors. Accompanied by contemplative classical music a female head appears on the left facing the naked sex and hip area of a man on the right hand of the screen. She tries to hypnotize the man’s penis with gazes and facial movements and this effort results in different stadiums of the man’s arousal and in an absurd form of conversation. Like in his paintings and drawings Pavel Pepperstein combines provocation, paro-dy and absurdity with an almost innocent approach.

In her installations FRANCIS UPRICHTARD uses art, craft and display as equal elements in relation to each other. Coloured human figures are arranged purposefully together with found objects on specially produced or found furniture. In the installation Straight In Front the colour of the sculptures is related to the surface of the scarf and the table rather than to their own sculptured shape. The male figure is pain-ted in the colours of the table top and the female one mirrors the colours of the scarf dress she is wea-ring. The installation forms an awkward microcosm where the figures seem to ignore each other and the table is to high to sit on it.

IORI WALLACE presents in his installation Streitservice a porcelain bowl from a wedding set designed in Meissen in the state before being painted with decoration. The naturalistic relief tells a story that seems to be a fight of swans. The imaginary argument of the swans is listed among drinks in a bar menu and like in a fable alludes to a situation between humans. The bowl is filled with macadamia nuts covered in grey acrylic paint which stylised like that have lost their function as a snack to go with a cocktail. In his works Iori Wallace exposes classifications and norms that come with collecting objects and stages conversa-tions and domestic dramas circling around collecting, exhibiting and desiring these objects.

MAXIMILIAN ZENTZ ZLOMOVITZ’ S works play with the aesthetics of destruction and manipulation of the object. With industrially produced materials like metal, plastic, rubber or neon light he creates sculptures that seem to come from a different reality. The work Analyse consists of an oil barrel that is covered in spray paint to make it look like it was burned out and a metal tube that pieces the barrel in the middle.

A weird plastic object in an indefinable form lies inside the barrel and leaves the viewer with questions. In the installation Channel an iron chain permeates a melted plastic chair, connecting a metal rod and an amorphous plastic object to each other. Like Analyse it deals with relations between objects that seem to replace human relationships in a gloomy science fiction idea.
www.galeriekamm.de