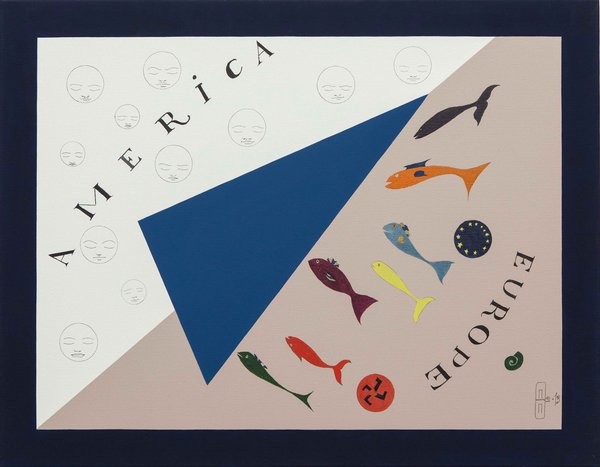 Suprematism, founded by Malevich and his circle, had a huge impact on the art world. However, this movement did not develop rapidly during the twentieth century. Dominated by the triumph of Stalin's socialist realism at the end of the 20s, suprematism itself turned into a Suprima: an insular and at the same time magnificent sign, intended for meditation. Suprematist geometrical figures now look like pieces of a frustrated future. However, an aura of Suprematism still remains a winner - and this is its paradoxical oddity.

Suprematists wanted to "mark with Suprima" all things in the world and thus to ensure the notional flight of these things to the bright abstract future. In this sense, the American flag became the ideal Suprima of the XX century. Jasper Johns has proved that as well as the Black Square, the flag too is an insular and a magnificent sign, intended for meditation.

Many artists in the West (especially American abstract artists and pop artists) were seriously trying to answer the question "what is a western meditation?". Today I want to ask myself and the audience: what is meditation in general? Because this question isn't asked in India, Japan or China, it means we are talking about western meditation. If suddenly it becomes apparent that modernity is incompatible with meditative practices, and that the word "meditation" is today totally inappropriate, then maybe the artist should just end it all, as did Mark Rothko? Of course, he should! However, one should refrain from suicide, at least because in 2013 everyone who may wish to commit suicide may inadvertently commit murder, simply because the boundaries between self and other people is far too blurred.

In the eternal American War, between North and South, the North always wins. It is sad that the North always represents Progress. It would be nice if the North permanently remained strictly conservative and never interfered in the affairs of progress! Life on earth would become brighter, ladies and gentlemen! Northerners pollute the future with their painful memories, clogging up the collective intelligence with the pain of their climate-phobia - a phobia of the cold. Because of this the world is now overheated and suffocating. They say that God loves the abstract. I readily believe that! Moreover, this assertion inspires in me a religious optimism. After all, if God loves abstraction, then God is not in himself an abstraction, because abstract shapes are essentially indifferent to each other.
www.galeriekamm.de