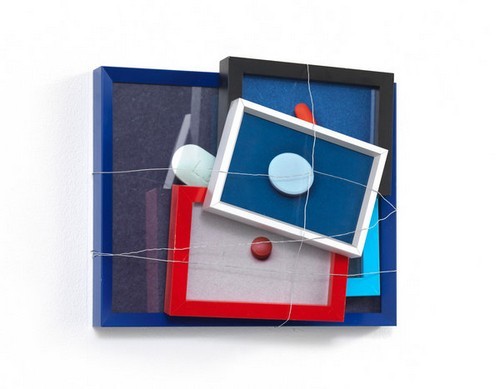 20. In March 2010 I visited a cemetery in rural Mexico and discovered a peculiar practice formerly unknown to me. On several graves crosses of different design, material and age stood tied together in a rather improvised manner. Each cross was tied to the one before it with metal wire so that the crosses partially covered each other. Only the first cross, the one at the back, was properly mounted on to the grave or stuck into the ground.

21. Flipping through a book on Latin American Architecture I came upon the house(s) of Frida Kahlo and Diego Riveira in Mexico City. The house has fascinated me for years due to its very direct translation of the couple’s relationship into concrete. A house for each of them, of radically different layouts, connected by a bridge. The book didn’t hold any information I was not already familiar with, but I enjoyed the fact that it listed the house as Functionalist Architecture.

22. Rumors have it that X, a famous composer, known as a rather difficult eccentric, when invited to do a series of concerts in London a few years ago demanded a hotel suite with a very specific layout. He would only play the concerts if he were given a room with doors right and left allowing for direct access from two other hotel rooms. One for each of his lovers.

23. After putting up Like Origami Gone Wrong in Kunstmuseum Thun, in the early summer of 2007 I took a few days off. I booked myself into an old Grand Hotel nearby and spent the days walking in the mountains. On one of these walks I stopped to take in the spectacular view of the valley, as my gaze traveled I saw the strangest thing: weirdly archaic looking architectures organized in a circle. Amongst them a pyramid, next to it a Mayan temple and next to that something that looked like a castle from a future civilization.

Later I learned that the place was a now defunct fun fair called The Mystery Park.

24. On October 31st 1517 Martin Luther famously posted his Ninety-Five Theses on the door of the Castle Church in Wittenberg. Back then church doors often functioned as bulletin boards.

25. Anslagstavlan (The bulletin board) is the name of a Swedish television program produced by the state to pass on important information about Swedish society to the population. Each “information film” runs until, according to Swedish Television’s research, it has been seen by 1 million people. The Danish version of a program in the same format goes by the name OBS or Oplysning til Borgerne om Samfundet (Information to the Citizens about Society).
www.galeriekamm.de