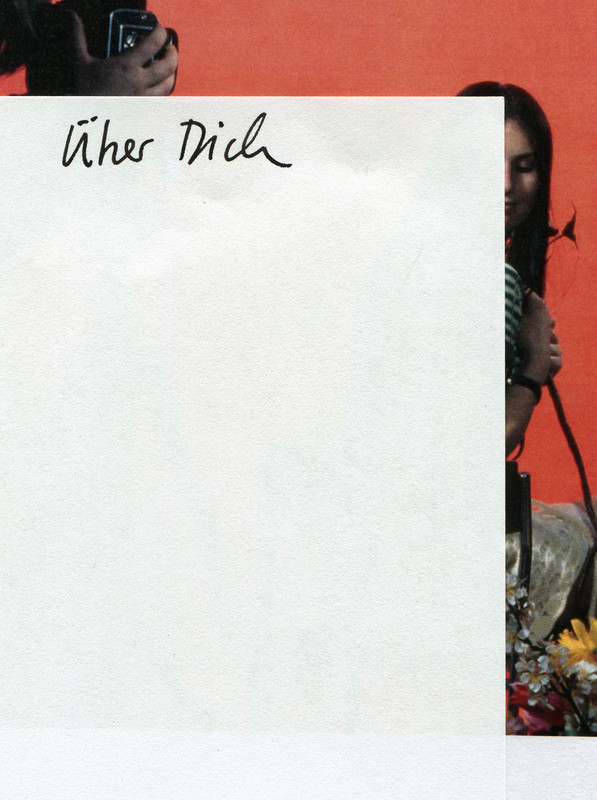 For the exhibition Über Dich (About you) Nina Hoffmann brings together five artistic positions which focus on the special connection between the person in front of and behind the camera as a central theme. Unlike that of a documentary or ethnographic gaze, the chosen photographs and moving images show a process of reflection, which takes place outside of the recording device.

Lukas Hoffmann’s photograph Rachel (2006) puts the shot’s focus on a young woman’s gaze into the camera. In a classic pose she has her front turned to the camera. Her facial expression, however, reveals that she questions the act of having her picture taken and it seems as though she penetrates the camera and the photographer with her skeptical gaze. By means of her resistant attitude she turns from a passively depicted person into an actively questioning one. Hers and the photographer’s gaze cross paths just as he takes the shot. As viewers we now assume the position of the photographer. While the scenery of a photograph usually lies within the space of the image, the viewer inevitably becomes Rachel’s counterpart and thus participates in the action.

Fundament (2012) by Nina Hoffmann shows two different ways of dealing with being filmed. We see two synchronized image sequences of a man and a woman taking turns to film each other. Initially unaware, the protagonists only notice that they are being filmed by looking into the camera. Nina Hoffmann is interested in this particular moment when both show a spontaneous reaction to deal with the situation. The protagonists are the artist’s parents, which triggers further appealing crossovers at those moments when Nina Hoffmann herself is visible in the image through mirror reflections. This way, the artist includes herself in the image. Potential K (2011) is a slide show whose photographs were taken over the course of eleven years. The multifaceted portrait of a friend of the artist’s focuses on the trusting intimacy between the two of them. This piece asks what insight we gain through the portrait of someone who shares a close relationship with the portrayer.

A special relation of closeness and distance also becomes a central theme in Iris Janke’s series Genealogie (1971-2012), in which she shows the development of family members of three generations. It includes material by the artist’s mother – who is a trained photographer herself – including pictures taken of Iris Janke as a child and photographs that Iris Janke took of her own children. A former “now“ becomes “back then“ and is mirrored in the present. The images, some of which were taken at the same places, show the evolving roles of the observer and observed while the wish to understand and accompany the other is constantly visible in the shots.

In Ulf Aminde’s film Frontalunterricht (2009) the recording camera is placed at the crossing point between young actors and the artist. As part of the event series “Schillertage“ the artist was supposed to work on a performance for the Staatstheater Mannheim with the group of young people. However the four weeks of rehearsal proved to be very problematic, putting the project at risk of being canceled. In order to convey to the teenagers what it feels like to be on a stage, Ulf Aminde organized an afternoon on a rehearsal space of the Staatstheater. While the participants were sitting on stage in the spotlight, the artist was behind the camera facing them. The only assignment was for the young men and women to imitate Ulf Aminde while he – invisible to us as the viewers – simultaneously imitated them. Through their performance the young actors depict a very accurate picture of the rehearsals by imitating Aminde’s attempts to tame them and gain control. They are translating the common experience into a spontaneous performance, holding up a multiple mirror to the artist. Frontalunterricht ultimately provided the basic condition to avoid the collapse of the original project, instead drawing a dense portrait of the previous tense few weeks. The camera thus finds itself placed right at the focal point of two clashing realities.

Susanne M. Winterling’s work untitled (artist as torquato tasso) (2009) is based on the artist’s interest in the 16th century Italian writer Torquato Tasso who lived in conflict with the courtly society and spent several years in prison due to a mental illness. In the flickering light of a projector we stand opposite Winterling, whom we see in one single frame as an over-life-sized frontal close-up and become witnesses of her metamorphosis. She does not perform grand gestures – “slipping into“ Torquato Tasso’s manic state of mind happens only in the artist’s facial expression. The clown-like white make-up with the fake nose not only reveals the masquerade, but also serves as a visible marker that the artist takes on in order to crossover the writer’s identity with her own. Leaving aside gender specific attributions, we see an approximation to the precarious disposition of a historical figure, while simultaneously pointing out the impossibility of the undertaking. The result is not a perfect crossover of two separate identities, but a clearly visible fracture showing their differences. We gaze into a dark, minimalistically coloured visionary room in which character study, self-portrait and projection become one.

The selected works display variations of mirroring oneself in the other. They do not just depict the portrayed person but also convey the act of being recorded. Both perspectives intertwine to become part of the works and equally the respective recording conditions are always reflected. Thus the works can also be understood as comments on the nature of representation. During the direct confrontation of the portrayer and the portrayed a psychological process takes place, which could be understood as the coordination of aesthetic and formal stagings. Über Dich spans a web of relations within these encounters, mirrorings and crossings.