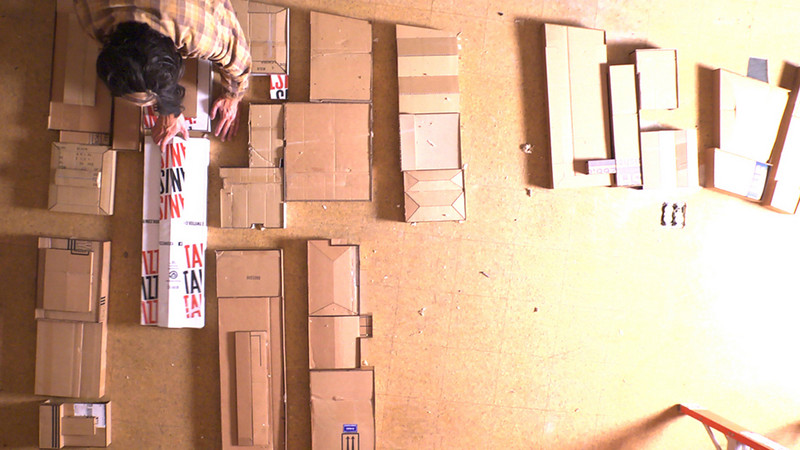 The jelly is apparently rising behind me. I could sit here and wait for it to cover me or move on, I don't know. Now that I have a few feelings to consider, and attitudes, decisions are more difficult. I suppose I'll step wherever I see a dry spot. Whenever The Jelly nips at my heels, I'll take a forward step. I'll get along.

For his first solo show at Galerie Neu, Alex Hubbard presents a new video work and seven urethane sculptures. Hubbard engages with the combination of painting and video, questioning how the gap between gesture and effect can be overcome or exploited. Alex Hubbard often employs everyday objects, as for example in his video works where he playfully arranges and demolishes them, or in his so called Bent Paintings where they are casted in urethane and are arranged all over the canvas.
Hereby he pursues an artistic strategy that transcends divisions among the media. The gesture of arranging and destroying is revealed as a means of production and staged at the same time in a performative, improvised aesthetic, whereby the construction and reception of the picture is constantly explored anew.

Across two rooms, sculptures of urethane are distributed, each called Studio, depicting cast toolboxes. Arranged on MDF pedestals or placed on thin metal feet, in the transparency of the material they lose their model quality and form an abstract hollow body. Fast drying and volatile materials like urethane, resin, and fiberglass require an improvised and quick way of working, which reveals parallels to Hubbard’s video works, for which an incalculable performative element is always present.

Hubbard’s new video work 300 South Mission Road refers to the area of Downtown LA marked by large industrial complexeswere the artist’s studio is located. The artist stages himself in his studio, wearing a wig and a fake belly, while at the start he appears painting in a box, he then towards the end violently frees himself from it. In other shots, cardboard models of the industrial building arise. Arranged in rows on the floor, these models made of pizza boxes are treated with other materials, illuminated with various lights, and shot both from close up and from a bird’s eye perspective. Various sound collages and voices from Spanish and English local radio stations accompany the images. The sequences in 300 South Mission Road alternate with interior and exterior shots of the studio, with the artist as a fictional figure and with the models and materials that point to the means of production behind artworks and exhibitions. While the work can almost be understood as an allegory of art production, it also explores the relationship between artist and studio space.
www.galerieneu.com