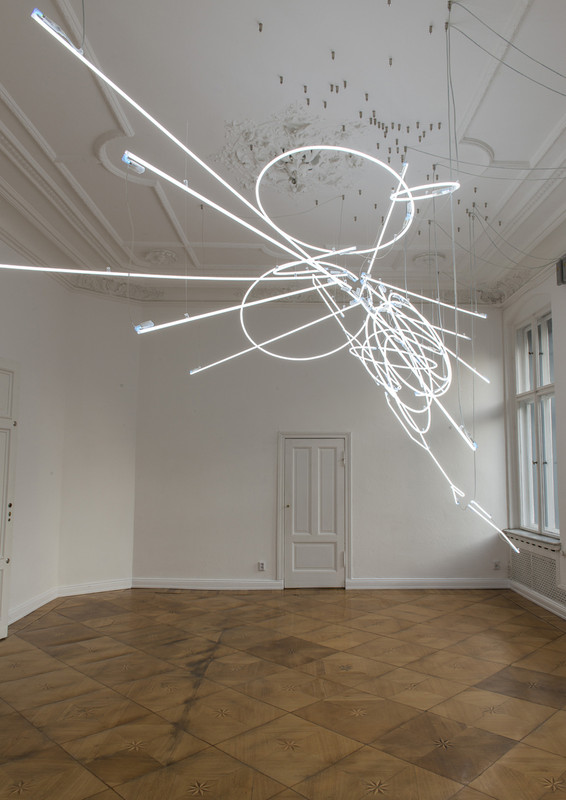 Past Present Future is the title on the invitation to this group show, running at Galerie Neu until the beginning of the new year.
This title embraces the time frame of the exhibited works in the spaces of the gallery also in an abstract sense . Featured as a motif on the invitation card, Claire Fontaine’s neon work bearing the same title (2011) has these three simple words glowing in bright white. Taken from a shop window of a New York fortuneteller, the work alludes to the subjective hopes and longings often linked to these three temporal parameters. Read within Claire Fontaine’s general oeuvre, the work also refers to the contradictions that result from the requirement for revolutionary ruptures on the one hand and the desire to preserve a strong link to the culture of the past on the other. The abstract works of New York artist Alex Hubbard move beyond traditional discourses on sculpture and painting. Son of Sunset Sam (2013), is based on a canvas that was mounted with all sorts of everyday objects, shaped, and cast.
The model of pigmented urethane makes it possible to recognize the canvas, but goes a step further in that the medium of painting is manipulated, distorted, bent, leaning on the ground, in its presence creating a new kind of sculpture that oscillates between media. The wall work Abalone #4 (2013) seems to remain in the realm of the discourse of painting. And yet the urethane shell, mounted on a canvas and provided with a “traditional” gold frame, also mixes the parameters of genre ascription. Nick Mauss’ large wall work moves in the intermediate space of genres between drawing, collage, and installation. Mauss’ visual approach on the one hand crosses figuration as well as abstraction, and at the same time tries to open a third way by fixing a poetics in which all categories can be stretched to their limits, while a transition between the media, affects, and techniques can be generated.
Crises (2012) seems to have been created in a moment where the artwork’s process of becoming is manifest in the surface. Cerith Wyn Evans’ expansive installation E=L=A=P=S=U=R=E (In Vitro) (2013) using white neon tubes of a diameter of more than 6 meters forms a visual reference to the Higgs boson. Also known as the “god particle,” a term that is rather frowned upon in physics, the particle was first theorized in 1964, and its discovery was awarded the Nobel Prize in 2012. Furthermore the work references the diagram of the chemical structure of the drug LSD, first synthesized by Albert Hofmann. Cerith Wyn Evans’ neon installation activates a specific constellation of references and shapes that borrow from various realms and are linked together, without summoning a didactic illustration. Directed at the pleasure of discovering visual or scientific innovations, here two theoretical concepts are given a form which has only been shown to possess a fictional potentiality. Both, the Higgs boson and LSD, hold the potential to change the world in its customary structure and to generate something new. Floating over the heads of the beholder, E=L=A=P=S=U=R=E (In Vitro) creates a light sculpture that also explores the potentialities in their physical presence in space. As in the motif on the invitation to Past Present Future, here various aspects come together bringing the potential forces of the past into the present and the future.
www.galerieneu.com