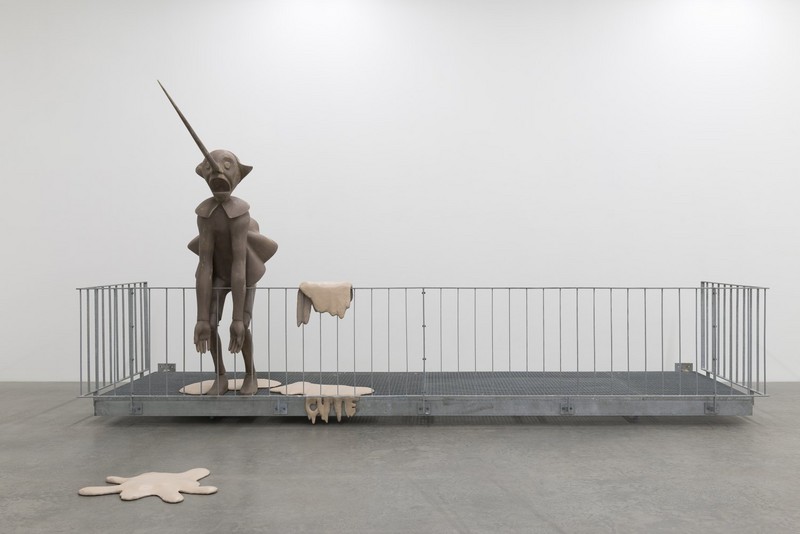 Die Fremde, 1998, a group exhibition with works by Cosima von Bonin, Birgit Megerle, Francis Picabia, Andreas Slominski, Emily Sundblad and Erika Verzutti addresses the roles that hidden gestures, contradiction and irritation can play in art. Just as “Die Fremde” (‘the strange,’ or ‘other’) can refer equally to both an unknown person, or a place, the exhibited works all make use of ambivalent pictorial strategies and a rhetoric of disillusionment in order to provoke lingering puzzling effects.

The show’s title derives from an artwork by Andreas Slominski of the same name that dates back to 1998. Slominski’s Die Fremde is a procedural instruction to carry the hair of an unknown woman in one’s underwear. Like many of Slominski’s works, this piece toys with the apparent absence of the artwork, pointing directly to an action performed in secret, which remains per se invisible.
The qualities of absurdity and playfulness that infuse Slominski’s practice also play a key role in the work of Cosima von Bonin. Her piece here presents an “Italian” with a long nose, whose bizarre appearance irritatingly, but humorously impresses itself onto the viewer’s mind. This figure last appeared on the exterior façade of the Museum of Modern Art (mumok) in Vienna, where he perched on a balcony and vomited into the piazza below.
The bronze wall work by Brazilian artist Erika Verzutti is representative of the artist’s continuing examination of the formal properties of sculpture. Verzutti experiments with organic materials. She pushes objects to the point of alienation through material and formal combinations that blend suggestions of human anatomy and gestures with resolutely object-like qualities.
For Birgit Megerle, figuration serves on the other hand to bring the invisible, or unnoticed into relief. Megerle’s paintings and drawings often foreground figures with defiantly confident expressions against mellifluously decorated background compositions, highlighting the ambiguous dissonance between the two.
Emily Sundblad’s work escapes narrow categorization and includes paintings, performances and songs that confound the viewer by, among other things, pulling seemingly distant and old-fashioned motifs, or ‘sujets’ into the present.
Here, Sundblad’s still life of flowers provides a bridge to Francis Picabia’s saccharine, sentimental portrait of woman made in the 1940s. Kitsch served strategic purposes for Picabia, who used the effects of alienation cultivated by Dada in order to turn the conventions of his time on their head.
www.galerieneu.com