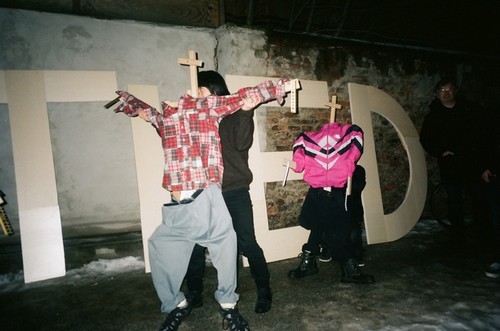 We, whoever happen to be here, invite three performance artists who work as a collective. With the help of amazing organizing impulses, they manage to fly 80000 km (50000 miles) in a calendar year. They are Premiere Executives. Their elite status is constantly renewed by UNITED.
Once, they came upon UNTIED.com, where UNITED employee complaints are made available to the public. The three performance artists made a project inspired by the complaints of UNTIED (dance, music, text, ready-made, and monuments). One thing they made a mental note of was the fact that “the cabin attendants of UNITED formed the first union of its kind in 1945.”
Three performance artists are heading here right now to give us a performance of UNITED and UNTIED.

A. Scores:
1. Dance and Actions
2. Office with object (a large panel)
3. Text performance: How to earn 80000 km in a calendar year
4a. Fake Beer (Food Sample, gathering unlimited)
4b. RIOT THE BAR (emptying bottles)
5. CD: I am an employee of United (Available for €2. Voice performance with some
folk instruments)
6. UNTIED monuments (moving)

B. Installation:
Three Chairs
Fake Beer
RIOT THE BAR (bottles)
How to earn 80000 km in a calendar year (3 sheets)
UNTIED monuments
A stack of their performance photos
Fake Red wine
A Poster (memberships)