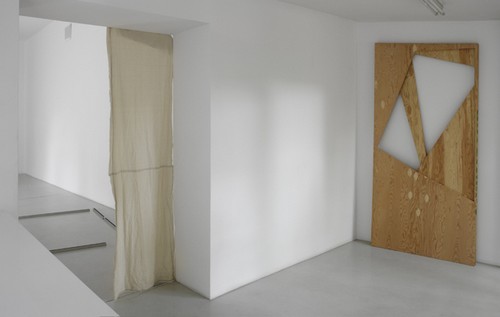 I like when you have to invest the time and slowly feel the effect of the orchestration
without being able to flee to the press release.

(Gedi Sibony in conversation with Elizabeth Schambelan, Wrong Times, July 2005) Given this statement, what can a press release say about an exhibition? Gedi Sibony hits the nail on the head and seems to make any elaborate explanation superfluous. The paradoxical – and from the start impossible – task of a press release would therefore be not to say anything about the exhibition which it proposes to introduce.
Indeed, this may be quite appropriate for Gedi Sibony’s works. As austere as they may appear, they hardly hide anything that could be explained subsequently with a text. In the ideal case, the beholders would only find an articulation of what they experienced, consciously or subconsciously, in the exhibition – even the confusion that might result from looking at Sibony’s objects, which often look as if they have been put together in a very rough-and-ready manner, is a calculated part of his artistic practice. The question ‘Is that still art? (a constant in the general repertory of clichés since the beginnings of Modern art in the nineteenth century) here takes a surprising turn and becomes – in a form that speaks more of openness than obduracy – an operational element of Sibony’s aesthetics.
The materials of his works are usually so simple, sparse and everyday that they might almost seem trivial, especially since the transitions between working materials and finished work are not always clearly defined. Their (potential) incompleteness, in fact, reveals another aspect of Sibony’s aesthetic strategy. The gaps and unexpected links in the artist’s simple positings provoke leaps that deliver something of skilful punch lines while also directing attention to nuances or the ephemeral. Especially in the case of those works whose materials and presentation relate directly to their architectural surroundings, we see that Sibony’s vocabulary does not just play with the beholders’ expectations or the alternation between delicate humour and sober, contemplative lyricism, but also negotiates interests such as texture, light, and the perception of space. At this point, forms, materials, and conditions speak for themselves, without requiring the reductive abstraction of a press release. From 5 September to 18 October 2008, Galerie Neu will show new work by the New York artist Gedi Sibony for the first time. Most recently, Sibony has participated exhibitions including ‘Unmonumental’ at the New Museum in New York and solo shows at Greene Naftali, New York, the Kunsthalle St. Gallen in Switzerland and the FRAC Champagne-Ardenne in France. His work is the subject of a forthcoming monograph published by JRP Ringier. For further information, please contact the gallery at mail@galerieneu.com or by phone: +49 30 285 7550.
www.galerieneu.com