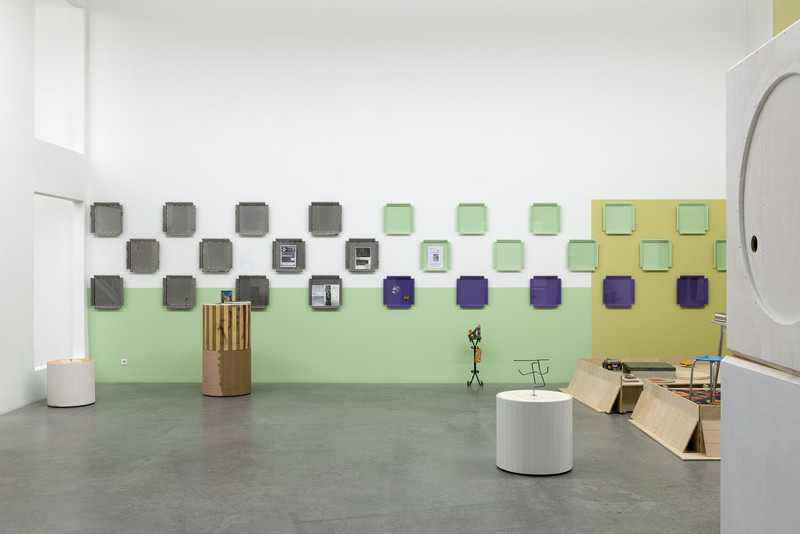 In the exhibition Teile & peile Manfred Pernice brings together the varied bodies of works and conceptual preoccupations that have characterized his practice in recent years, pulling them into a hybrid form. Pernice’s work has taken many different shapes, but all are linked by an interest in sculptural form, an ongoing engagement with systems of display/exhibition, and an examination of cultural and personal modes of spatial orientation.

The German term “Peilung”, which loosely translates into English as “direction finding” or “orientation”, is a central motif in the artist’s work. The cover of a cookie jar can provide a spatial orientation thanks to a list of German city names, which helps to create a certain kind of “artificial” positioning. This localization can be completed by information and references that, together with the lid, develop a relatively concrete sense of place. A further work is made from cubes, barrels and paper that are piled together to form a small tower. The result is like a building of dignified proportions, but a casual sense of monumentality. Three additions have been made on the basis of this form; these ‘copies’ take on qualities of original, not adding anything to it. In one of the barrels, there is a drawer containing material that localizes the work in a broader context. The handle on the drawer’s cover is worked on and thereby opens up a new sculptural dimension. In a flash of simultaneity, pedestal and container fuse together into one image of a barrel- sculpture.

This is Manfred Pernice’s fifth solo show at Galerie Neu. His work is able to take objects out of their received contexts and open up perspectives that enable the viewer to understand both object and context in new ways. His artistic practice can thus be interpreted as an expansive process in which an investigation of the dynamics of display completes and facilitates the development of new types of non-static objects. The strict and equal attention Pernice gives to the nature of the exhibition as well as object making allows his works to break the traditional boundaries that separate work and viewer.

Manfred Pernice was born in 1963 in Hildesheim. He lives and works in Berlin. His works have been shown in numerous international solo and group exhibitions, including the Gemeentemuseum Den Haag (2014), in the Secession in Vienna (2010), in the Neue Nationalgalerie in Berlin (2010), at the Centre Pompidou, Paris (2009), the Venice Biennial (2003) , the documenta11 in Kassel (2002) and at Portikus in Frankfurt a.M. (2000). Pernice‘s work is included in institutional collections such as the Solomon R. Guggenheim Museum in New York, the Ludwig Museum in Cologne, the Stedelijk Museum voor Actuele Kunst in Gent and the Nationalgalerie at Hamburger Bahnhof in Berlin.
www.galerieneu.com