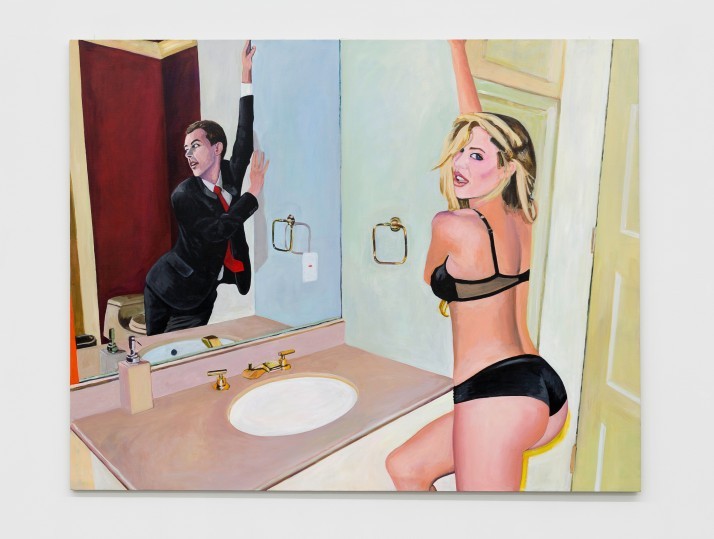 Merlin Carpenter opens up painting as a negative space – not a space for negation – but aspace of negativity. Just as in Karl Marx’ critique of political economy, where value is introduced as a negative social relation that binds us, rather than as a material quality genuine to what surrounds us, Carpenter identifies his medium by its negative social materiality. Instead of demonstrating his individual abilities to fill its form with content and thereby reinstate painting as a site of individual expression, Carpenter pushes its alienation from any anti-systemic praxis to the fore. This implies not least him, the painter, as Narcissus’ latest capitalist descendant. One of the central questions of painting as a negative social form is accordingly: What became of Narcissus, the man in the mirror?

In Business Women the man in the mirror is most definitely alive and well, so well, that he even manages to escape the mirror. In the show’s last painting he appears on a mounting horse, victorious, potent. Rather than being petrified and turned into a flower, as Ovid’s Metamorphosis would have it, Narcissus here is contentiously looking out at us from the paintings. He leaves the petrification to the women who, though standing in front of the mirror looking in, become sheer ornament, whose reflections he occupies and who have lost their gaze to him. The painter has taken over the reflective surface as his painterly property and Carpenter literalizes this metaphoric expropriation at the core of painting in its brutalist contemporary implications. He stages it as a sexed relation of commodity formation. As Kathy Acker put it in her aggressively affirmative discussion of Richard Prince’s “Spiritual America” in 1992: “Love plus hate is named d e s i r e .” And more than twenty years later there is stillnothing much to add to this.

Carpenter’s Narcissus – named Graham – has successfully identified the commodification of feminine narcissist poses as his chance at transferring his petrified destiny. Also, mirrors have never been specifically kind to female bodies in art, particularly in painting. While Narcissus, painting’s male archetype, in Caravaggio’s famous portrayal crouched in front of the water, to have his full figure reflected and to thus realize this screen as his, body horror enters the stage where female figures are mirrored in modern art. Think of Édouard Manet’s Un Bar aux Folies Bergère, where some female acrobat’s legs are dangling from the ceiling and where the female figure staring out at us consists of nothing but a cut off torso. Or Degas’ faceless dancers, whose bodies, aligned in front of ballet mirrors, turn into nothing but assorted part objects. As Linda Nochlin attested, the “body in pieces”, specifically the female body in pieces, remained a central trope of modern art. Here Tallulah, and Ashleigh are outsized by the mirrors cutting through them, while in Ashleigh’s, Victoria’s, Tallulah’s and Grace’s case the focal point ofthe viewers perception is directed to the women’s asses, while their face shot is occupied by Graham. He has taken over their mirror while their object status is reinforced. Carpenter stages a “sphere of symbolic use”, namely that of women. But in contrast to Lawrence Alloway’s 1970s identification of that sphere as the scenery of Photorealisms’ “Receptive Realism”, Carpenter’s attitude is neither receptive nor is it particularly realist. He instead pressurizes his source materials. What once was latent in the ads and editorial photographsof these women with Graham’s entering their painterly picture becomes literal: a symbolic sex that is naturalized no more.

In the 1990s the figure of irony had served as a deviational form within painting, saving Carpenter and many of his peers from desecrating themselves alongside their medium. Arguably, those days are over. And it was not least the success of their strategy that rendered irony as just another painterly trope. They fed irony to painting. But Carpenter, it seems, has chosen not make irony his painterly schtick, but to rather imply himself in the process of negation that opened up beyond it. Like Stephan Dillemuth Carpenter sees the narcissism in Narcissus and instead of covering it up he exposes it. Narcissus cherishes only his own image,while exposing all others to the voyeurism of his screen. But here Narcissus himself becomes exposed and Carpenter lays out painting in all its negative social form. It thereby is bestowedwith a sex that in its heightened symbolism is neither his nor ours: it is a negative sex.