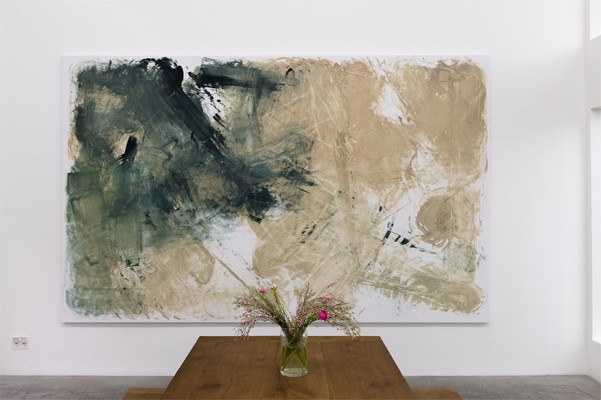 “Am I cleaning a large room or a small room?” asks the iRobot Scooba 450. Later works by JMW Turner (Snow Storm, Rough Sea with Wreckage, Seascape with Storm Coming On, etc.) are found and lost in the spinning brush and lubricating/sucking action of a floor-scrubbing robot. Using Mouse’s Back, Smoked Trout, Blazer and other colors selected from Farrow & Ball’s menu of “estate emulsions” (now readily available in Berlin), Spaulings channels the senile-visionary late late Turner in the robot’s drone-like way of attacking the canvas like any bathroom floor. A weather report in paint, a flood warning transmitting as interior décor, distributing estate emulsions according to the 450’s internal algorithm.

For a previous series of works on canvas, Spaulings redeployed an art historian as a paintbrush. “I’m stuck,” says his robot-substitute, stalled in a pool of Eating Room Red. And at the end of her cycle, it’s always: “I’m finished with my job and ready for the next.” This brush is a black box on wheels, chatty and tireless, and capable of coating two Schnabel-sized areas on a single battery charge. She always begins with a circular motion, sensors on, spiraling outwards from the center before scumbling off on jaunty diagonals as she calculates the size and shape of the job. “Bohemian Groove,” an alternate title for this exhibition, ended up on one of the paintings instead. In another, a two-eyed sea monster seems to emerge from the waves.
www.galerieneu.com