Ziggy on the Land of Drunken Trees 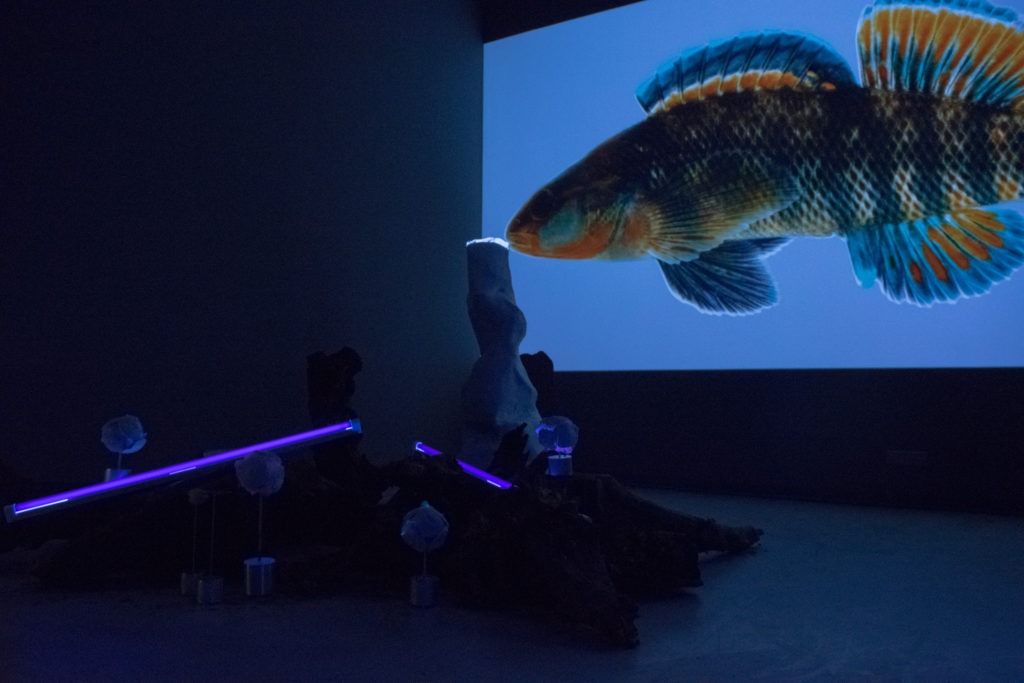 
Ziggy on the Land of Drunken Trees takes us into a post-human era after the Anthropocene, a world in which non-humans assume the central position of mankind. The exhibition asks: What kind of animal mutations will happen in the near future, what species will be efficient in the context of the worldwide changing ecology? Where will humans go? Will they colonise space or even the sea?

Galerie Wedding transforms into an immersive landscape consisting of amorphous organic and mechanic sculptures that move within the space: a choir of sea-shells, a film collage about changing sex in ecology and a series of images on methane holes appearing in the Siberian Tundra. With this exhibition Anne Duk Hee Jordan aims to illuminate new perspectives and the tangible effects of climate change on sea and land. Jordan, who has a professional background in marine ecology, sustainable cooking and art, presents a humourous and well researched perspective on processes of adaptation that go beyond human time.

»I have exchanged extensively with marine biologists and geologists, but I make most of my discoveries during my many dives – in direct communication with the sea dwellers.« (Anne Duk Hee Jordan)

As a witness to the delicate and by far unexplored deep sea world, the artist mediates the logic, dynamics and ungraspable materiality of the ecological changes on land and in the ocean. In an increasingly regimented world, the seas both remain an outpost of anarchy and out-of-sight out-of-mind oblivion meanwhile new landmarks of genetic adaptations and human colonialisation are happening. Specifically this is shown within the film collage »Changing Sex in Ecology,« 2018, a project with Pauline Doutreluingne, with documentation of how marine creatures and humans are affected by environmental changes. In the exhibition, a choir of organic, mechanic sea-shell sculptures creates hydroid alien sounds, and even an oracularly singing saw is heard. Also a series of images on methane holes appearing in the Siberian Tundra, is displayed. Thus a deep future is explored that seems momentarily imaginable, inhabitable.
www.galeriewedding.de