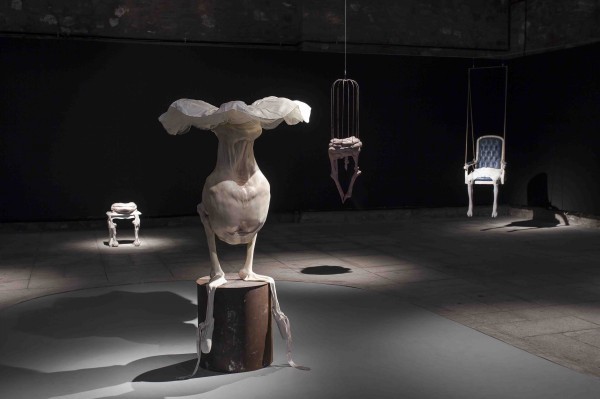 "My work refers at the moment of twilight, when the night is the closest to the day. A period of time that doesn't reference anything. A primitive dimension that is full of potential and exhausted energy, during which you cannot even imagine the future of the new and the fresh. The body cannot abandon the night, nor can it acknowledge the day. This time period is a cavity between day and night, during which even God, if there is one, is busy with something else.”
Francesco Albano

Galerist is pleased to present Francesco Albano’s third solo exhibition titled ‘On the Eve’ from August 29th to September 20th , 2013 at the Single Dome of Tophane-i Amire Culture and Art Center of Mimar Sinan Fine Arts University. Albano creates lifelike sculptures of deformed human bodies by using wax and polyester as main materials. He manipulates primary body parts, skin and bone. He leaves the viewer with the uncanny feeling that radiates from these forms devoid of spirit and sentiment.

Albano assigns skin the leading role and interprets bones as the only sculptural form inherent to the human anatomy. He uses the dramatic combination of the two to focus on the effects of social and psychological pressures on human body and on collective conscience. The relation of skin and bone parallels the polarity of night and day in these extraordinary figures, which Albano conceives with a fascination with the coexistence of such profound and conflicting notions.

Twilight, the enigmatic segment of time on the eve of day and night, is a spiritual reference point for Albano’s ambivalent creations. They point to the possibility of the existence of things that are out of the scope of the rational mind. Skin is the boundary between the inside and the outside; the facade that defines the identity of the body to the external world; the hollow surface associated with feelings such as absence and desire. Bone is the fixed foundation which supports skin by holding it up, defining its structure and giving it permanence. Bone, by securing a mechanical and structural system for skin, volumizes and animates a conductive and organic existence beyond everyday reality.

Francesco Albano explores the fringe of deconstruction, creating alternative forms of being, leaving the viewer to confront a dramatic and concreate lack of spirit.