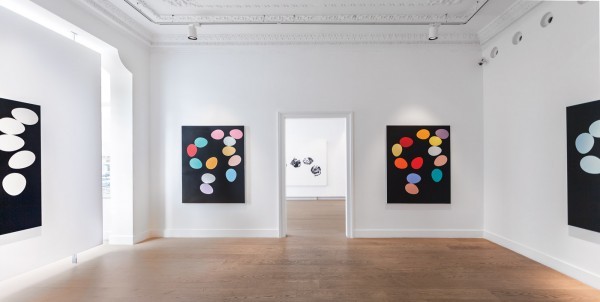 Galerist opens the 2012-2013 exhibition season in its Tepebaşı gallery with a sophisticated survey of Gavin Turk’s latest works of seven years period. British artist’s first solo show in Istanbul takes place from September 18th to October 16th, 2012.
Gavin Turk rose to prominence in the early 1990s during the so-called ‘Young British Artists’ phenomenon: a wave of media interest provoked by an ambitious generation of artists with a flair for self-promotion. As an artist with a family name of “Turk”, Gavin Turk makes the irresistible conflation and appropriation of referring the show title to the possessive cultural label "Turk". The title of the show points to a process of cultural translation. This is a play on the convention that exists where exhibitions are frequently titled simply but ostentatiously by the name of the artist suggesting that the work in the show is the entire story or oeuvre of that artist. Art always gets made as a response to various cultural stimuli and also interpreted with these as points of reference. The naming of a show in this way through twisted repetition alludes to the way that an artist's name or signature in today’s terms becomes a kind of brand which in this case is both a national issue and a personal one. Another way of looking at this might be to ask “what point does a cultural boundary occur?”
Gavin Turk deals with contemporary art history and cultural studies by means of his paintings, sculptures and installations, especially with concepts like authorship, identity and authenticity. In this exhibition ‘GT Eggs’ painting series is displayed as a tribute for the acrylic on canvas titled ‘Egg paintings’ of Warhol, the contemporary pioneer of the 20th Century Pop-Art movement, also the silkscreen series titled ‘Turk Love’ is produced as a reference to another well-known American contemporary artist Robert Indiana (1928).
Gavin Turk’s first solo exhibition in Istanbul also consists of artist’s bronze statue dated 2011, entitled ‘Handle’, as well as a neon glass work ‘The Observing Eye’ dated 2011 and another bronze statue ‘Refuse’ dating back to 2001, from artist’s rubbish themed series of works. From the same theme, three other series of acrylic on canvas called ‘Eye’, dedicated to the ‘evil eye’ that exists in almost everyone’s life and the eye beads, a leading symbol in traditional Turkish culture, will also be presented to theaudience.
‘TÜRK’ resolves with the video installation entitled ‘Mechanical Turk’. Based on a 18th Century automaton, this work refers to a moving and intelligent chess machine called ‘Turk’, offered to the Queen of Holy Roman Empire, of Hungary and of Bohemia, the Austrian Archduchess Maria Theresa by the inventor Wolfgang Von Kempelen. The image of ‘invincible Turk’ gained through frequent invasions to Europe during that period is thought to influence the name of this machine. In this video work dated 2006, Gavin Turk replaces the inanimate Ottoman figure which supposedly even defeated French military genius Napoléon Bonaparte, and contributes to the discussions about identity and content in today’s conditions.

ABOUT THE ARTIST
Gavin Turk, (1967, Guildford, Surrey, England) works and lives in London. The British artist is the pioneer of various sculpture forms, frequently used and commonly appreciated nowadays in British art like bronze, mummification, references from historical and art icons as well as the use of rubbish in artworks. His installations and sculptures deal with issues like identity, authenticity and value of art.
Concerned with the transformative effect of the reception by the myth of the artist and the authorship of a work, Turk’s engagement with this modernist, avant-garde debate stretches back to the ready-mades of Marcel Duchamp.
Turk was denied his MA certificate from the Royal College of Art at the age of 24, since, his degree show presentation was consisted of en empty white studio with an English Heritage plaque installed, which simply bore the inscription ‘Gavin Turk / Sculpture / Worked Here 1989-1991.’The piece brought the artist notoriety in the art world. Soon, his work was discovered by Charles Saatchi and presented in the exhibition ‘Sensation’ in 1997(with a critical painting where he adopts the identity of Elvis Presley as depicted by Andy Warhol ), making his presence as a central figure in the worldwide known galleries.
Gavin Turk’s works have been included in many museums such as NY Moma, Tate Britain, Victoria & Albert Museum and collections like Deutsche Bank. Turk borrows figures like Sid Vicious, Andy Warhol, Elvis Presley, Che Guevara and Jean-Paul Maray, both from cultural popular and intellectual history and develops a critical method where he, in a way, ‘takes as a hostage’ the personae of this famous people on two dimensional canvases. Turk also discusses the art history in his work through some recognizable elements from Rene Magritte, Jasper Johns, Marcel Duchamp and Yves Klein.
Including his “Nail” sculpture designed for the building One New Change, next to St. Paul Cathedral in London, Gavin Turk produces important art works in public spaces. Turk’s work has been included in many exhibitions such as Istanbul Biennial (1999), ‘Century City’ – Tate Modern London (2001), ‘Remix: Contemporary Art and Pop’, Tate Liverpool (2002) ve ‘Coollustre’, Collection Lambert en Avignon (2003) and 'Pop Life: Art in a Material World' (2009). Turk have been running a community education project based troupe of artist since 2001 with his partner and wife Deborah Curtis named ‘The House of Fairy Tales’. This project is presented in a mobile gallery horse box in Glastonbury and Hay-on-Wye and still
exhibited in Edinburgh.
Among the works of the artist dealing during his career with value and authenticity in art, the piece entitled ‘Revolting Brick’ is also interesting and significant. In December 2009, Turk was invited to the ‘Bricks’ exhibition in Southeast London with this piece ‘Revolting Brick’, however the day before the exhibition, his work had been stolen and replaced with a fake brick helding the words ‘Thank you and Have a Nice Day, Next’ and was part of a set of 500 bricks that was left at the exhibition venue. Even though the artist was upset at this theft, he was flattered since what happened raised questions about value and worth of art works.
www.galerist.com.tr