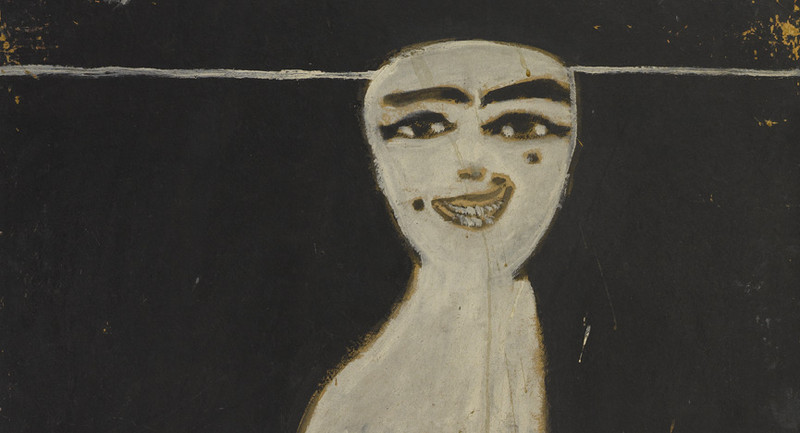 Galerist is proud to announce that it will be representing Semiha Berksoy in Turkey and abroad. ‘Wall of Hallucination’; the first gallery exhibition of the artist will take place between November 13, 2014 – January 10, 2015.
This exhibition, presenting highlights from the artist’s prolific and multi-faceted career, offers a dynamic interpretation of Berksoy’s ouevre, as well as her unique perspective. A selection of paintings, audio recordings, videos, photographs, personal objects and documents will be presented through a biographic and thematic approach.Semiha Berksoy says that she sees the reflections of people whom she defines as supreme characters, leaving great marks on her life, on the ‘Wall of Hallucination’ situated in her room.

Berksoy lived a life amongst spirits of her loved ones; she turned to them for inspiration and kept them alive through her paintings. The artist doesn’t see death as an end to existence but considers it a part of life.

Berksoy focuses on people and incidents shaping her life through love, death and music mostly with her self-portraits. Having lost her mother at the tender age of eight, it is visible in Berksoy’s work that she used art as a medium of self-expression and as a way of holding onto life, whereas love is the source and meaning of life for her. She is committed to opera, theatre, art, people whom she is inspired by, animals, plants and to life itself with love.Semiha Berksoy’s opera career, which started in 1929 and traversed many countries and difficulties, ended in 1972 when she asked for her retirement. Berksoy carries over her experience from opera and theatre, which enables her to express emotional intensity with only one gesture, to her practice by depicting her wisdom and disappointment using naïve and simple brush strokes. Berksoy creates scenes coming out of dark emotions, from underneath the line, which in her words ‘holds death and life, past and future at an equal level, indicating that the concept of time does not exist’.

The partnership between Galerist and Semiha Berksoy Foundation aims to promote the artist’s work in Turkey and internationally and to support the establishment of Semiha Berksoy Museum, the Foundation’s aim since five years. Beyond being an exhibition space for artist’s works, the museum is going to be a living venue including a theatre stage, a concert hall and classes for performing arts education.

ABOUT SEMİHA BERKSOY
Born in 1910 in Istanbul, Semiha Berksoy was accepted to Istanbul Municipality Conservatory in 1928. One year later, she gave her first public concert with Cemal Reşit Rey and joined Namık İsmail Workshop at the Academy of Fine Arts in the same year. In 1931, she starred in ‘In the Streets of Istanbul’, the first Turkish sound movie by Muhsin Ertuğrul.
In 1936 she got accepted to Berlin State Music Academy and graduated the opera department as primus. She became the first Turkish opera artist to perform in Europe when she played the leading role in ‘Ariadne auf Naxos’ in honor of Richard Strauss’ 75th birthday.
Berksoy, who returned to her home country in 1940, took part in countless acclaimed performances in Turkey and worldwide. In 1998, Berksoy was awarded the title of ‘State Artist’ and the following year, she performed in Robert Wilson’s ‘The Days Before: Death, Destruction and Detroit II’ in Lincoln Centre, New York.
In a life dedicated to art, the ‘primadonna’ also made great contributions in the field of visual arts, particularly with her paintings, installations and performances. Her works has been exhibited in a retrospective shows at İş Sanat Kibele Gallery and Yapı Kredi Kazım Taşkent Gallery in Istanbul, in addition to many prestigious institutions in Berlin, Paris, New York and Vienna such as Manifesta II in Luxemburg and Venice Biennial curated by Rosa Martinez in 2005.
www.galerist.com.tr