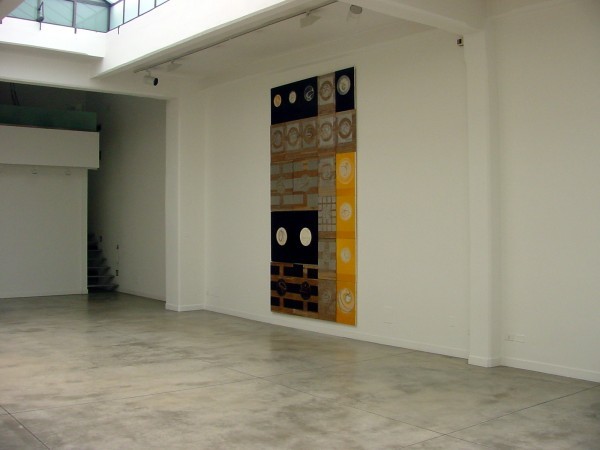 Domenico Bianchi’s first shows took place at the beginning of the ‘seventies (Ugo Ferranti, Fine Arts Building, New York, May 1977). The material he first made use of underlined that aspect of lightness to be found in all his later work: watercolour, which allows us to read the work’s structure in detail. Bianchi maintains this capacity to illuminate the formal structure of his pictures even when using other materials and tools: layers of wax, the excisions of woodcut. His main interest is light, but also basic is the constructive and methodological procedures employed for creating a distance between the work and its author. Bianchi always uses in his work an intrinsic logic with respect to the material and the form used, as also with respect to his procedures and placement. The standard-format tiles of wax become genuinely constructive bricks used to build up the picture by following marquetry technique which determines discipline, rigour, and slowness of elaboration. It is as though the work must seem to have made itself and that all traces of the artist must disappear. “Even though his pictures appear to be slow, carefully studied, and in no way impulsive in their layout, they are in fact highly impassioned. This passion is to be found in the artist’s approach towards the painterly object: it is an extremely precious object, as sacred as a Madonna, an object the artist creates with delicate ability by unwearyingly working on the wax or wooden surface with the patience of a goldsmith” Rudi Fuchs has written. “So Bianchi’s work is extremely solemn. Its quality is to be found in its measure, in its avoidance of impetuosity”. In most of his works, Bianchi identifies a central nucleus, a kind of barycentre, which is indicated by a greater incisiveness of the marks, the intensity of the colour or even by protuberances. In the present case Bianchi has worked with the spaces of the Cardi gallery specifically in mind. The layout is the result of a particular plan. As you enter, on the large wall to the left there is a single series: six large-scale paintings in silver-white wax; a work contrasting white wax and grey wax (as though the glow of the silver-white had softened into a different colour state: that of opacity); black wax around a white interior. This is a “family” of works made from the artist’s most typical material: malleable wax, but treated in different ways. The circular form in the centre has become more complex and even displays five superimpositions. The wall to the right, instead, hosts a work organised vertically: of the twenty-one small works about half are wooden pieces engraved with a xylographic matrix technique. The artist had already made one-off xylographic prints, but in this case there only remains the matrix. In some of them silver, like a ray of light, is inserted. The other small pieces are in yellow or black wax with a yellow, black, or white interior. On the upstairs floor there is a more rarefied atmosphere that evokes the lightness of Bianchi’s earlier works. Like the wings of angels painted by Piero della Francesca, these watercolours are harmonised by particular chromatic choices. Each picture is a structure, an object and, even more, a piece of architecture, whether in the case of the “tougher” wooden works or in the more painterly wax ones. Simple elements on which light draws.
© Galleria Cardi
www.galleriacardi.com