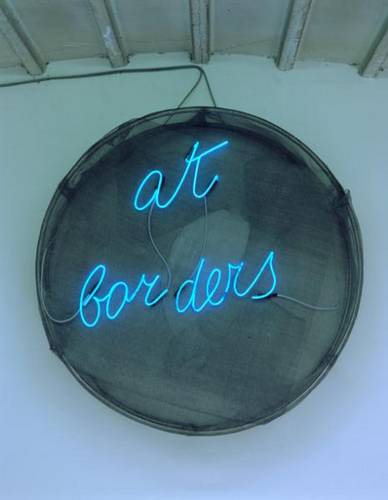 The Cardi gallery in Milan is showing L’Arte e i suoi materiali, Art and its Materials, an exhibition of medium to large-scale works created by some of the most important artists on the Italian scene. The show will be held both in our premises in Corso di Porta Nuova 38 and in Piazza Sant’Erasmo 3. Its aim is to demonstrate the particular importance that materials and techniques once considered outside the area of art have had over the past ten years: embroidery, cardboard, cement (Alighiero Boetti), ice generated by a freezer, lead, wax, salt, neon lights (Pierpaolo Calzolari), shaped three-dimensional canvases (Enrico Castellani), painted objects (Nicola De Maria), gold, skeletons, objects (Gino De Domenicis), metal, coal, cord, fire, live animals (Jannis Kounellis), wax, branches, fruit, stones, neon, stretchers, iron, steel, wood, glass (Mario Merz), rags, mirrors, mirroring steel, iron, furniture, stone (Michelangelo Pistoletto), reinforced cement, iron (Giuseppe Uncini), and metal, hide, glass ampoules, ceramic crucibles, reactive chemical substances, canoes, wax, stroboscopes (Gilberto Zorio). Though including works by various Italian artists, this show has an international objective and presents masterpieces by living artists whose work is to be found in the most important museums in the world. In fact the works chosen underline both the contemporary spirit as well as universal values. From the beginning of the twentieth century, when the plastic arts began to use materials and languages previously considered unfitting, art began to open its confines to previously unconsidered experiences. The examples of this are infinite and include the painted wood compositions of Kurt Schwitters and Pablo Picasso; the ready-made objects of Marcel Duchamp and Man Ray, for example a bicycle wheel, a urinal, a bottle-opener, a shovel; and Salvador Dalì’s plastic lobster (which replaced a telephone receiver). The list could continue right up to the present day. If, though, the objects were used as metaphors in the first half of the century, with the passing of time they became mainly self-referential linguistic elements. The various materials employed have thus become both signs embodying the meaning of the work and also elements that denote and affirm the identity of the artist, to the point at which, if an artist uses a material employed by another, he is considered an imitator. However, the meanings the various materials have within the work itself allude above all to a complex relationship with the spirit, nature, the social context, and ideology or its absence. With Modernism the use of materials extraneous to the traditional picture changed the identity of art and resulted in a double effect, that of creating a new kind of beauty and, at the same time, of modifying the meaning of the picture which, in itself, took on the identity of the ‘material’: painting ceased being a technique and itself became one of the many materials available to the artist.