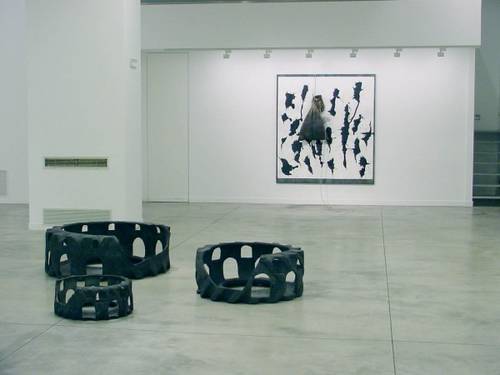 The Cardi gallery is pleased to announce "Nero" art show at Corso di Porta Nuova 38 space with the participation of Domenico Bianchi, Pier paolo Calzolari, paolo Canevari, Jannis Counellis, Peter Wùthrich and Gilberto Zorio.Black is the color that dominated the last century. From the black art of Malevich to the cruxifics of Ad Reinardht, to the sketches of Franz Kline at the irons of Jannis Kounellis and the stars and canoes of Gilberto Zorio and many others. This colour has taken on multiple symbologies, that range far and wide. For the European culture black is a colour that expresses the dramatic and archetypal symbols of duality. The colour of mourning that is also the representation of sensuality and eroticism- black contrasting with the paleness of flesh. It absorbs and suffocates all other the colors but it is made up of all of them. It is darkness, but also the blindness that stems from too much light. Alchemy states that all matter passes through three states nigredo,albedo and rubedo hence the dictum Opus Alchemicum. In the first phase the soul does not recognize the deception of the senses, in the second the epiphany of the worlds and finally the cancellation of all Ignorance. In it’s most intense form black is the chaos of alchemy and thus the beginning of the Alchemist search for inner gold, where man makes order unto chaos, giving light unto darkness. Black is also associated with the First of Pytaghoras. Despite all its philosophical and symbological meanings black in our times is the very autonomous material that by the architecture of an artist is the essence of definition and structure that in it’s solidity presents a canvas for intense expression.